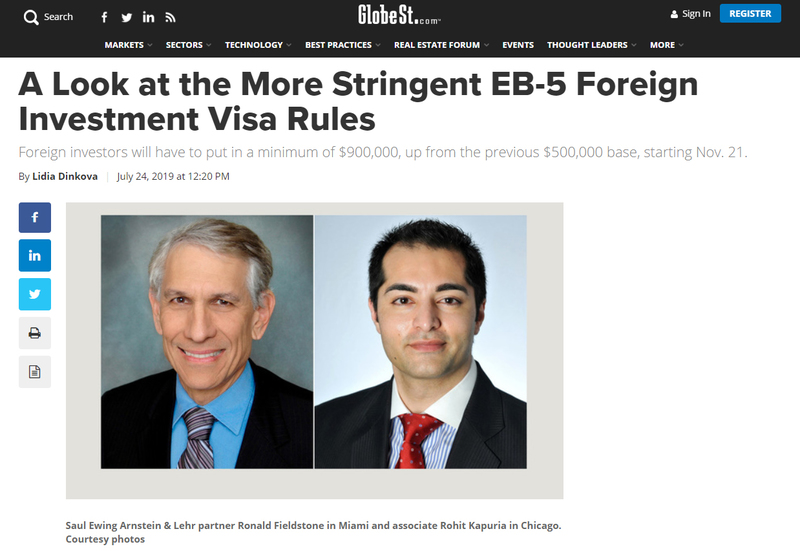 The Trump administration on Wednesday rolled out stringent new EB-5 rules that nearly double the amount foreigners must invest and raise other thresholds, making it harder for immigrants and projects to qualify under the federal visa program.

Foreigners seeking green cards for themselves and their families will have to put at least $900,000 into a U.S. commercial venture, up from the current $500,000. The amount is only for ventures in specially targeted areas such as rural areas and places with higher than average unemployment.

In more economically viable areas, the ante was raised to $1.8 million compared with the previous $1 million.

“Part of the argument is that this is one of the cheapest programs for an immigration visa program,” said Rohit Kapuria, an associate with Saul Ewing Arnstein & Lehr in Chicago. “It’s never been adjusted for inflation. So the mechanism and the formula to basically amend it is based on what we’ve had in the last 29 years.”

U.S. Citizenship and Immigration Services, which issued an advance copy of the regulations Tuesday, oversees EB-5 in the Department of Homeland Security. The agency dialed back the bottom-rung minimum investments from a 2017 proposal that called for $1.35 million.

The new dollar amounts are based on the original 1992 levels indexed to inflation. An estimated $35 billion was raised under the program to create 350,000 jobs since 2010.

Some developers who use EB-5 financing foresee a short-term deluge of investments before the changes take effect as applicants seek to qualify with lower contributions.

A change that’s more worrisome to program boosters is a tougher standard to land the targeted employment area designation, shrinking eligibility for the lower-tier category.

Power over the designations also will switch from states to the federal government, and program supporters fear a backlog after the change.

A targeted employment area is either rural based on a low population or it has over 20,000 people but an unemployment rate that’s over 150% of the national average. The new rules keep the rural designation but make it more difficult to qualify under the unemployment rule.

“They felt that the program was not being utilized properly because you are building skyscrapers in New York,” said Ronald Fieldstone, a Saul Ewing partner in Miami.

The new rules still allow other census tracts to be included but limit the number of tracts to about five and require all to border the project location.

Miami immigration attorney Jose Latour of Latour Law doesn’t see the changes as bad news. The investment will keep flowing to where it’s supposed to go — poor and rural areas.

“The rule radically reforms abuse by major developers, which have managed to steer virtually all EB-5 immigrant investor funds toward the development of ultra-luxury condominiums in America’s wealthiest neighborhoods, diverting investments from the poor and rural areas for which they were intended,” Latour said by email.

Existing census tract aggregation amounted to gerrymandering to qualify “the wealthiest neighborhoods” for the lower-tier investment threshold, he said. The new rules will restore the integrity of the program.

The duo, which uses EB-5 funds to help finance new hotels, isn’t as worried about the financial step increase. Rodriguez Sr. is more concerned that fewer projects will qualify.

“There’s a cost of doing business,” he said. “That doesn’t mean some people won’t pay $1.8 million, but it’s going to dramatically cut down the program. Why is it so popular? Because you are migrating a family for $500,000. That sounds good. $1.8 million will eliminate a lot of people.”

Immigrants could seek a visa in other countries with more favorable terms, he added.

The argument over whether funds were misdirected stretched on when Congress repeatedly extended the existing law without addressing issues raised by critics.

In South Florida’s booming real estate market, EB-5 is helping finance major projects, but some have landed in court with investors alleging fraud. Developers and financial recruiters have been accused of pocketing the money and not creating the promised job-creating businesses.

To get a visa, investors must wait to determine whether an EB-5 project created the minimum number of new jobs.

One of the most notable alleged flops was at Vermont’s Jay Peak ski area, which met the definition of a rural, economically challenged region. A federal indictment issued in May charged AnC Bio Vermont was supposed to raise $118 million for a biotech center and other new businesses in Newport, a town of just over 4,000.