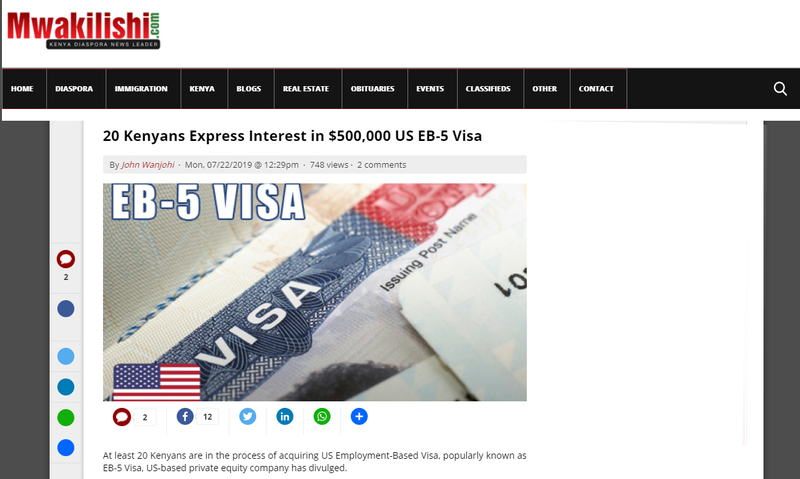 At least 20 Kenyans are in the process of acquiring US Employment-Based Visa, popularly known as EB-5 Visa, US-based private equity company has divulged.

Atlantic American Partners through its Managing Director Daniel Ryan said it received applications worth more than Sh1 billion from the group of Kenyans who are seeking to migrate to the US, Capital FM reported.

EB-5 Visa is issued to applicants who invest at least Sh50 million in American businesses or a real estate project that can generate at least 10 permanent jobs.

The late US President George H.W. Bush introduced the EB-5 Visa in 1990 to stimulate the country’s economy through job creation and capital investment by foreign investors.

Atlantic American Partners said most of the Kenyan applicants are business owners who want to educate their children in the US. The company said three of the applicants have already paid the full amount.

“There are three requirements for those wishing to get the visa. One, you must pass the international background check. Two, you have documented the source of funds that you legally have five hundred dollars to invest and three that you have no criminal background,” Ryan said in a statement.

Ryan said the company is looking to sign up at least 25 Kenyan investors by the end of this year. The US issues 10,000 such visas annually.