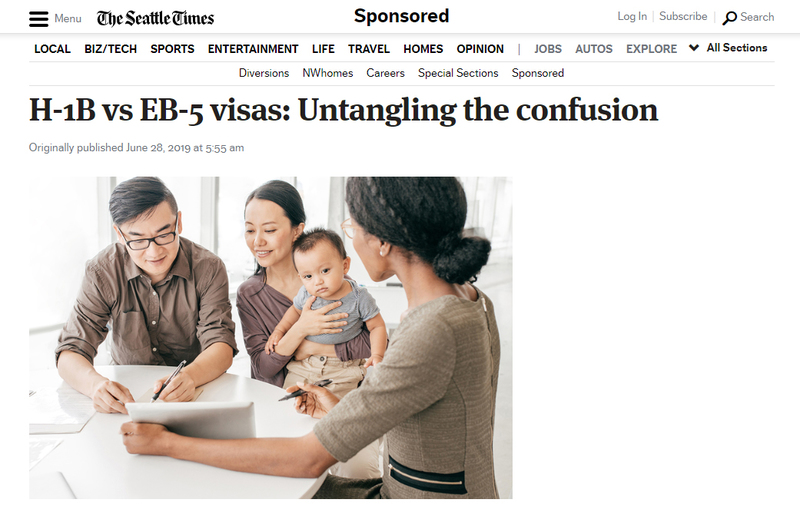 Two popular programs that allow employment are the H-1B program and the EB-5 visa.

Many of us have heard of – or know someone hired through – the H1-B visa program, which encourages employers to temporarily bring in international talent. But the U.S. is attracting skilled, high-achieving immigrants in more than one way. In fact, individuals can apply under a number of employment-based immigration programs.

The H-1B typically requires a potential employer to petition the government for the worker’s entrance, and has often been used regionally within the high-tech field.

The EB-5 isn’t as widely recognized by the general public, but the program enables up to 10,000 individuals to gain permanent residency annually as a U.S. government employment-based immigration preference program. The employment-based programs start with EB-1 (for those with an extraordinary ability or academic career), then includes EB-2 (typically for those with advanced degrees) and EB-3 (typically professionals and skilled workers). The EB-4 designation includes a wide range of employment categories, including religious workers, armed forces members, and broadcasters with Radio Free Asia.

EB-5 visas, however, don’t require a prearranged employer. Instead, the visa applicant must invest capital into a project that creates at least 10 jobs, either solo or through what’s known as a regional center, a method of pooling multiple investors’ money into new developments.

Of course, there are challenges, as well. “The biggest drawback of the EB-5 program is that although it creates a lot of jobs around the country, there’s a worldwide quota, with per country limits,” says Cletus Weber, a Mercer Island-based immigration attorney working with regional centers and immigrant investors.

Two popular programs that allow employment are the H-1B program and the EB-5 visa. Here’s a quick comparison of the programs:

What are the qualifications?

The H-1B program is more readily recognized. It authorizes the temporary employment of foreign individuals who hold high-skill qualifications – and interestingly enough, fashion modeling. The H-1B does not require an investment from applicants, although employers may pay to complete the accompanying I-29 form, Petition for a Nonimmigrant Worker.

The EB-5 program requires an investment of at least $500,000, but does not require special skills or degrees. After the first two years of investing plus any country quota-related delays, an EB-5 visa holder can petition for removal of conditions, by providing proof that they’ve invested in a project that created at least 10 jobs. Typically, the USCIS verifies the job creation, then the immigrant can reside here permanently.

How long can a visa holder stay?

The H-1B program is meant to enable only a temporary stay. A foreign worker is usually authorized to stay for three years, but that authorization can be renewed for another three years, for a total of six years, in general.

In contrast, the EB-5 grants conditional entrance for the first two years, but after conditions are met – the employee can reside in the U.S. permanently.

What are the spousal work options?

Since the Obama administration, spouses of H-1B visa holders have been able to work under the H-4 EAD work permit, but recent reports seem to indicate that the Trump administration will remove spousal work options.

With the EB-5, an investor’s spouse may work in the U.S. without restrictions, after gaining permanent conditional residency.

How many people can enter through the H-1B and EB-5 visa programs?

This H-1B visa has an annual “cap” of 85,000 visas each fiscal year, 20,000 of which are reserved for those with a graduate degree from a U.S.-based university or college.

The EB-5 visa has an annual cap of 10,000 visas per years. To accommodate an investor and his or her immediate family, about three visas are needed for every approved application.

How long could someone wait for a visa approval?

There are nearly three times the H1-B applicants as the annual limit, and petitioners are entered into a random lottery for approval.

EB-5 visa applicants stand in a “line,” sometimes for years. Although an orderly solution, applicants can face long wait times, depending on the nation of origin. If a country’s quota isn’t filled, the extra visas are offered to other applicants, to help to reduce waitlists. Currently, China-born applicants must wait approximately 14 years; Vietnam approximately 7 years, and India approximately 6 years, according to Weber.

Where must the foreign national reside physically?

H1-B visa applicants typically must live near their sponsoring employer.

EB-5 visa applicants can live anywhere in the U.S., and don’t need to reside near their investment property. For example, the Seattle-based Stazione:25 apartment complex is partially funded by the Smith Western Regional Center, which has attracted investors who live in other states – while other investors live nearby, and enjoy watching the building add stories.

Can this visa lead to a green card?

The EB-5 visa includes a process for acquiring a green card, after the two-year investment period conditions are satisfied.

Determining whether an H1-B, EB-5 or another type of classification is best depends on an individual’s unique circumstances, Weber notes.