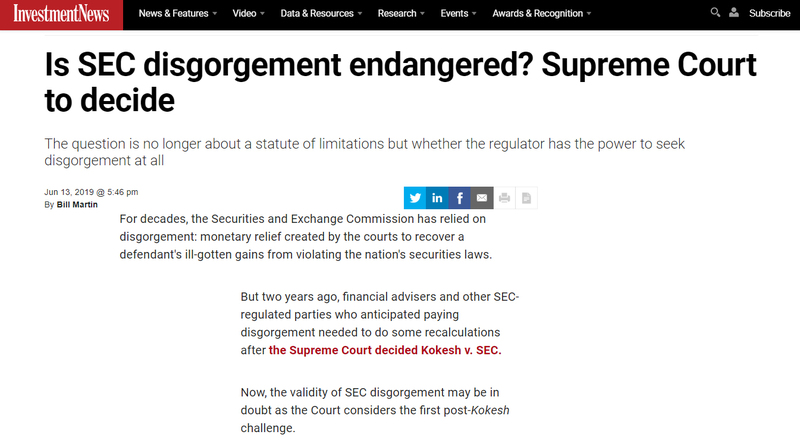 For decades, the Securities and Exchange Commission has relied on disgorgement: monetary relief created by the courts to recover a defendant's ill-gotten gains from violating the nation's securities laws.

But two years ago, financial advisers and other SEC-regulated parties who anticipated paying disgorgement needed to do some recalculations after the Supreme Court decided Kokesh v. SEC.​

Now, the validity of SEC disgorgement may be in doubt as the Court considers the first post-Kokeshchallenge.

The unanimous Kokesh decision held that SEC disgorgement may not stretch as far back in time as supported by the evidence of misconduct. Instead, a five-year statute of limitations cabins such relief. The question presented to the Court today is whether the SEC has the power to seek disgorgement at all.

For decades, the SEC has urged courts to order disgorgement as an exercise of their inherent equity power. With no time limit, SEC disgorgement became a powerful tool as the relief could encompass many years of misconduct, leading to large disgorgement orders. In Fiscal Year 2016, disgorgement accounted for approximately 70% of the over $4 billion ordered in SEC enforcement actions.

In holding that the statute of limitations already applicable to SEC penalties also applies to disgorgement, Kokesh concluded that disgorgement constitutes a kind of penalty. The Court reasoned that disgorgement is ordered for violations against the United States, not particular injured parties, and for punitive purposes.

Months after Kokesh, the SEC estimated that it lost approximately $900 million in disgorgement in actions it had already filed. Kokesh also complicated investigations where the SEC learns of years-old misconduct due to the difficulty of marshaling sufficient investigative resources to charge violations quickly enough.

Moreover, the Court stated in one ominous footnote that Kokesh did not answer the question of whether courts can order SEC disgorgement at all. As the petitioner had not made that argument, this footnote arguably invited challenges to the very legitimacy of SEC disgorgement.

On May 31, 2019, petitioners Charles Liu and Xin Wang accepted the invitation. Mr. Liu and Ms. Wang challenged an SEC disgorgement order, arguing that the district court lacked such authority without statutory authorization.

The Court may accept the case. Kokesh observed that disgorgement, like SEC penalties, often did not lead to funds being returned to allegedly injured parties. In Mr. Liu's and Ms. Wang's case, the district court did not order the SEC to take any steps to ensure such compensation of victims, despite at least 50 individuals identified as investors in the EB-5 visa fraud scheme. Kokesh also noted that courts often disregard legitimate business expenses in calculating disgorgement, thus leading to orders exceeding the ill-gotten gains resulting from the securities violation. Mr. Liu and Ms. Wang objected to the district court's refusal to account for such expenses as well.

SEC disgorgement appears increasingly tenuous as an equitable remedy. Kokesh's conclusion that disgorgement is a kind of penalty seems to dictate that disgorgement cannot be ordered without statutory authorization. If the Court passes on the first challenge to the SEC's disgorgement power after Kokesh, don't be surprised to see others.