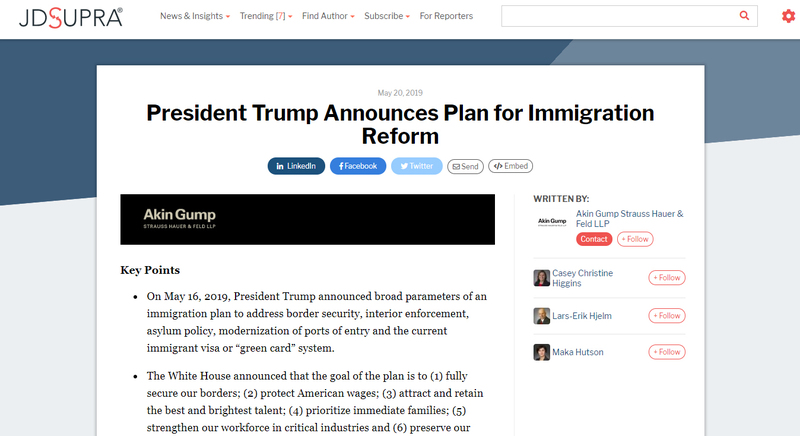 In an effort to shift toward a “merit-based” green card system, the plan allocates 57 percent of green cards based on employment and skill, 33 percent to family-based recipients and 10 percent to humanitarian recipients. Under the current immigration system, approximately two-thirds of green cards are based on family ties, and only 12 percent are issued to employment-based applicants.

The employment-based visas, called “Build America Visas,” will be distributed in three main categories: (1) extraordinary talent; (2) professional and specialized vocations and (3) exceptional students. Visas will be distributed to recipients in accordance with a points system. Points will be allocated based on several factors, including age (with younger workers preferred), English proficiency, offer of employment and level of education. Anyone who was waiting in line for a visa prior to the implementation of the new system will have to reapply, but will receive additional points as a result of their previous application. The total number of green cards issued will not increase from the current levels.

An additional category will include visas available for “employment investment or job creation,” presumably similar to the current EB-5 program.

All visa recipients will need to submit to a background check and a health screening. They will further need to pass a civics test. The background check, health screening and the civics test will constitute the first step of the process; the second step will involve the application of the points and the ultimate selection of the applicant. It also appears that employers will not be able to petition for their employees directly; instead, the point system will apply to all employment-based green card applicants.

The plan does not address “Dreamers,” individuals who were brought to the U.S. illegally as minors, nor does it address recipients of the Temporary Protected Status or 11 million undocumented residents currently in the United States. Further, the plan makes no changes to nonimmigrant visa programs, like the H-1B program, and does not mandate the use of E-Verify for employers.