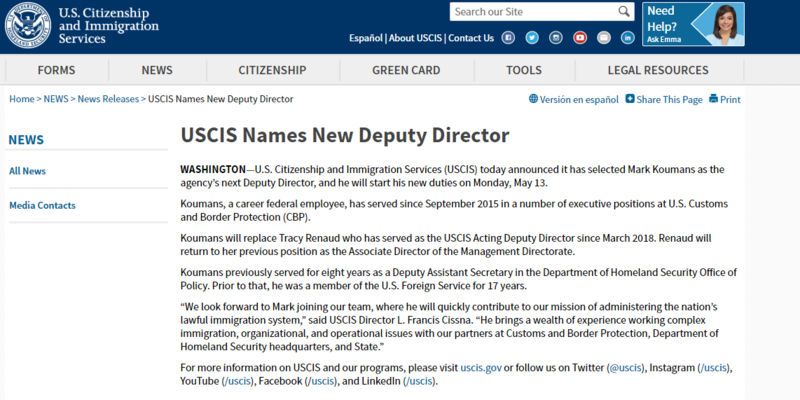 U.S. Citizenship and Immigration Services (USCIS) today announced it has selected Mark Koumans as the agency’s next Deputy Director, and he will start his new duties on Monday, May 13.

Koumans, a career federal employee, has served since September 2015 in a number of executive positions at U.S. Customs and Border Protection (CBP).

Koumans will replace Tracy Renaud who has served as the USCIS Acting Deputy Director since March 2018. Renaud will return to her previous position as the Associate Director of the Management Directorate.

Koumans previously served for eight years as a Deputy Assistant Secretary in the Department of Homeland Security Office of Policy. Prior to that, he was a member of the U.S. Foreign Service for 17 years.

“We look forward to Mark joining our team, where he will quickly contribute to our mission of administering the nation’s lawful immigration system,” said USCIS Director L. Francis Cissna. “He brings a wealth of experience working complex immigration, organizational, and operational issues with our partners at Customs and Border Protection, Department of Homeland Security headquarters, and State.”