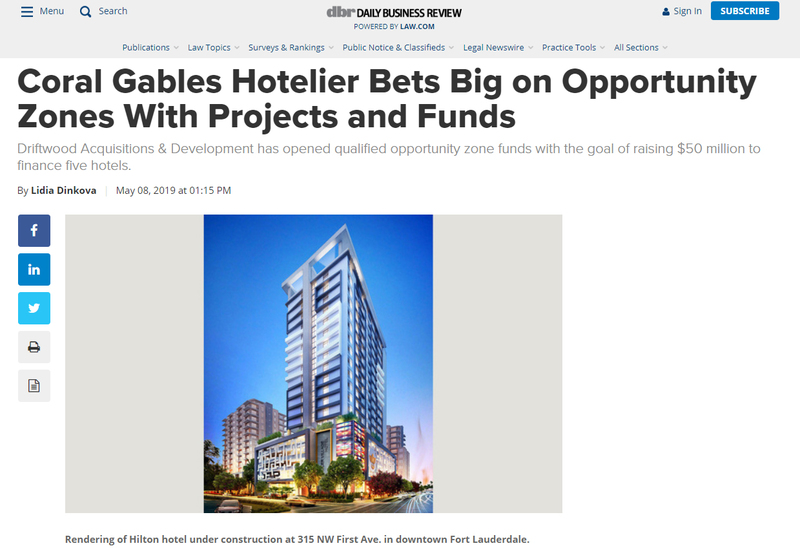 Driftwood Acquisitions & Development, formed in 2015, develops hotels and invests in existing ones that have steady cash flow and upside potential. It’s no stranger to complex financing structures after using EB-5 visa money and syndicating equity ownership in its hotels to accredited investors.

The company now is embarking on a qualified opportunity zone fund with the goal of raising $50 million for five hotels, two of them in Florida.

The company led by the father-son team of Carlos Rodriguez Sr. and Carlos Rodriguez Jr. joins the many developers and investors who are using the opportunity zones tool created in the 2017 federal tax overhaul.

How the investments are structured varies by deal and developer. Some buy sites in opportunity zones and count on financing from OZ funds. Others, like Driftwood, also start their own funds.

“At each deal level, we are going to have the Driftwood OZ fund that’s going to be our piece of it with our capital gains,” said Carlos Rodriguez Jr., chief operating officer.

As a fund manager, Driftwood is a step ahead of some others since the projects have been identified. Two are secured deals, and three are in the works.

“A lot of people are launching these funds without having seeded deals,” Rodriguez said. “Whoever is coming into the raise is going to be participating in all of those deals.”

Driftwood is planning a 19-story hotel at 315 NW First Ave. in downtown Fort Lauderdale’s Flagler Village and another at 1220 N. Market St. in Wilmington, Delaware.

Driftwood is redeveloping a 10-story office building as a 136-room Hotel InterContinental in Delaware.

The opportunity zone fund will finance only part of these hotels. The Fort Lauderdale hotel is line for funds from Driftwood Acquisitions, a lender and EB-5 foreign investors seeking green cards for job-creating projects.

The fund also will help pay for Driftwood Acquisitions’ investment in existing hotels, one in Florida and one out of state, and the development of a new one out of state.

Driftwood’s latest ventures are a variation on what it already has been doing — find and secure investors — just through the opportunity zone mechanism, Rodriguez said.

“Driftwood was formed really as its own capital sourcing vehicle as well as sponsor vehicle. We are vertically integrated in that sense where we are constantly looking for opportunities to buy and develop. We run the whole process and invite investors to participate,” he said. “That fundraising process that’s constantly ongoing is just very easy for us to then turn to this opportunity zone fund.”

One of Driftwood’s strategies is to syndicate 90% of the equity in its hotels. It now has more than 500 investors in its network, and they can join the OZ funds.

“In our last deal, we had capital gains in one of our hotel sales in Orlando, and we mentioned to everybody that we were looking for opportunity zones. They can take those capital gains and invest them” in the fund, Rodriguez said.

“We thought this was a good opportunity to target other investors that have capital gains in other areas that now are looking at commercial real estate.”