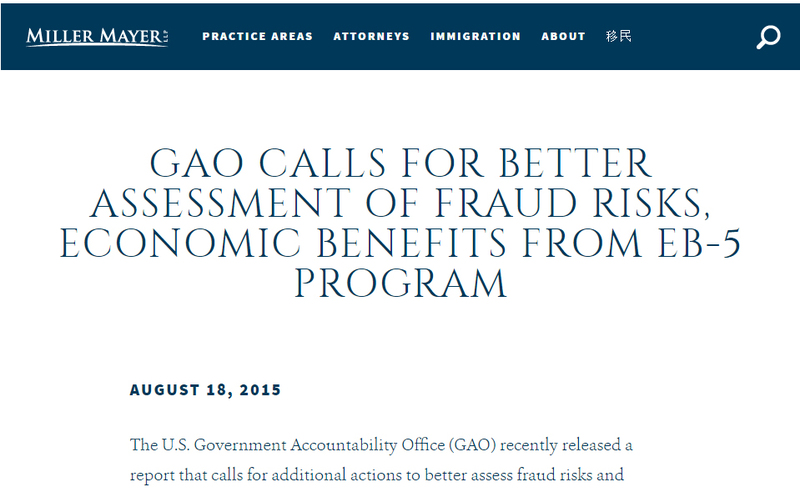 The U.S. Government Accountability Office (GAO) recently released a report that calls for additional actions to better assess fraud risks and report economic benefits in the EB-5 program. The GAO noted that fraud risks are constantly evolving and that U.S. Citizenship and Immigration Services (USCIS) continually identifies new fraud schemes, but the agency does not have documented plans to conduct regular future risk assessments.

Among other things, fraud risks include uncertainties about whether invested funds are obtained lawfully and various investment-related schemes to defraud investors. The GAO noted that USCIS has taken steps to address fraud risks by enhancing its fraud risk management efforts, including establishing a dedicated entity to oversee these efforts. However, USCIS's information systems and processes limit its ability to collect and use data on EB-5 program participants to address fraud risks. The GAO noted that USCIS plans to collect and maintain more complete data in its new information system. However, the GAO reported in May 2015 that the new system is nearly four years delayed. In the meantime, USCIS does not have a strategy for collecting additional information, including some information on businesses supported by EB-5 program investments, that officials noted could help mitigate fraud, such as misrepresentation of new businesses. Given that information system improvements with the potential to expand USCIS's fraud mitigation efforts will not take effect until 2017 at the earliest and that gaps exist in USCIS's other information collection efforts, developing a strategy for collecting such information would better position USCIS to identify and mitigate potential fraud, the GAO said.

The GAO noted that USCIS increased its capacity to verify job creation by increasing the size and expertise of its workforce and providing clarifying guidance and training, among other actions. However, the GAO said that USCIS's methodology for reporting program outcomes and overall economic benefits "is not valid and reliable because it may understate or overstate program benefits in certain instances" because it is based on the minimum program requirements of 10 jobs and a $500,000 investment per investor instead of the number of jobs and investment amounts collected by USCIS on individual EB-5 program forms. For example, the GAO noted, USCIS reported 4,500 jobs for 450 investors on one project using its methodology instead of 10,500 jobs reported on EB-5 program forms for that project. Further, investment amounts are not adjusted for investors who do not complete the program or invest $1 million instead of $500,000. USCIS officials said they were not statutorily required to develop a more comprehensive assessment. However, tracking and analyzing data on jobs and investments reported on program forms would better position USCIS to more reliably assess and report on the EB-5 program's economic benefits, the GAO said.