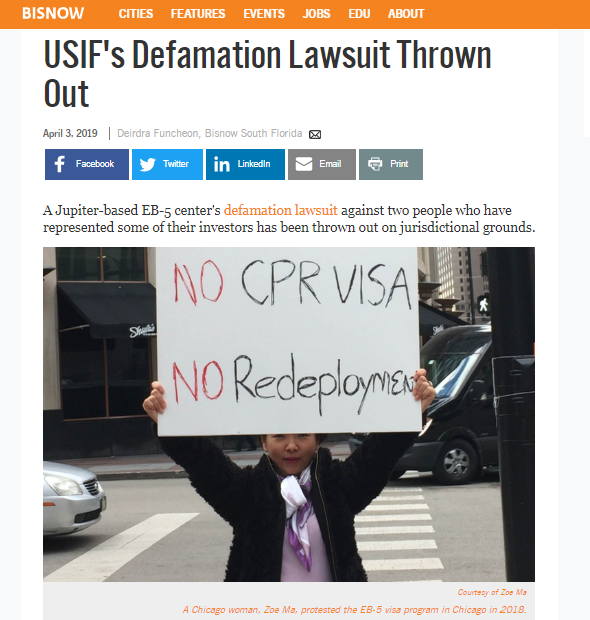 A Jupiter-based EB-5 center's defamation lawsuit against two people who have represented some of their investors has been thrown out on jurisdictional grounds.

The U.S. Immigration Fund, which bundles money from foreign investors to be used in U.S.-based projects under the federal EB-5 program, is in an ongoing feud with a Chicago-based Chinese-American researcher named Xuejun Makhsous (also known as Zoe Ma). Makhsous works with disgruntled Chinese investors who want their money out of EB-5 projects, and has sued USIF for racketeering.

USIF has called Makhsous an "ambulance chaser," and sued her and her former business associate, Douglas Litowitz, for defamation after they criticized USIF's projects online. The New York State Supreme Court dismissed the claim because Makhsous and Litowitz live in Chicago and USIF is based in Florida.

The claim "does not contain any allegations placing [Litowitz and Makhsous] in New York State," the court ruling stated. "The complaint does not assert that defendants have any business interests, ownership or any other connection of any kind to the state of New York."

Bisnow in February explored how USIF moved Chinese investors' money from one major project at 20 Times Square to another across the street, TSX Broadway. Makhsous was suspicious of the maneuver, believing it was a bid to rescue the second project. USIF contended that the money was only being moved so it continued to comply with EB-5 regulations that require funds to be "at risk."

After Makhsous voiced her concerns in Mandarin on a chat group for investors, USIF accused her of defamation. Litowitz, who is an attorney and represented some disgruntled clients, was shown a proposed settlement that was supposed to be for attorneys' eyes only, and USIF believed he shared that with Makhsous.

While the projects are located in New York, the court found that the events associated with the transfer of funds occurred in Florida.

"Plaintiffs approved withdrawal requests from the Florida office, and funds were disbursed to investors living outside New York from the Florida office," the ruling stated. "In any event, even accepting as true plaintiffs’ allegations that defendants’ actions caused harm in New York, mere allegations of committing a tort or injury in New York state is not enough to create personal jurisdiction unless the defendant also does business in the State or has significant ties to the State."