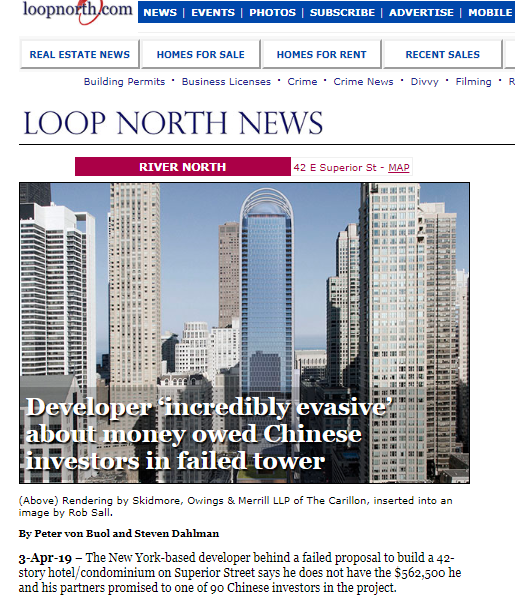 The New York-based developer behind a failed proposal to build a 42-story hotel/condominium on Superior Street says he does not have the $562,500 he and his partners promised to one of 90 Chinese investors in the project.

The project was rejected in 2017 but the investors say they have yet to get their money back.

The investors live in China and staked $49.5 million in the project to secure American visas through the EB-5 immigrant investor program.

The tower would have replaced three 19th century Victorian row houses at 42, 44, and 46 East Superior Street. Those buildings, once slated for demolition, were recently included by the city in a landmark district and are now safe from the wrecking ball.

Doug Litowitz, who represents ten of the investors, described Laytin as “incredibly evasive” at the March 29 hearing at Dirksen Federal Building.

He says Laytin told the judge he was the owner of two of the Superior Street row houses but did not know the status of a demolition permit and did not know the properties were part of a landmark district the city was considering at the time of the hearing.

He says Laytin has repeatedly claimed money owed to the investors is not in any bank account but tied up in “the project.” Litowitz says his clients, meanwhile, still do not have any concrete answers.

“The judge has to decide how to punish Laytin and his fellow investors at Symmetry for promising something they could not deliver.”

The proposal was rejected in April 2017 by 42nd Ward Alderman Brendan Reilly, who was concerned about the tower’s impact on neighborhood traffic.

Symmetry’s problems are not limited to Chicago. The company is involved in a 330-unit timeshare development on the Hawaiian island of Kauai. According to a March 31 article in The Garden Island newspaper, SPD II Makaiwa Resort Development LLC, registered to Laytin, defaulted on a $10 million loan and is being sued by the project’s financier, architect, landscape designer, two construction contractors, and a public relations firm hired to promote the development.