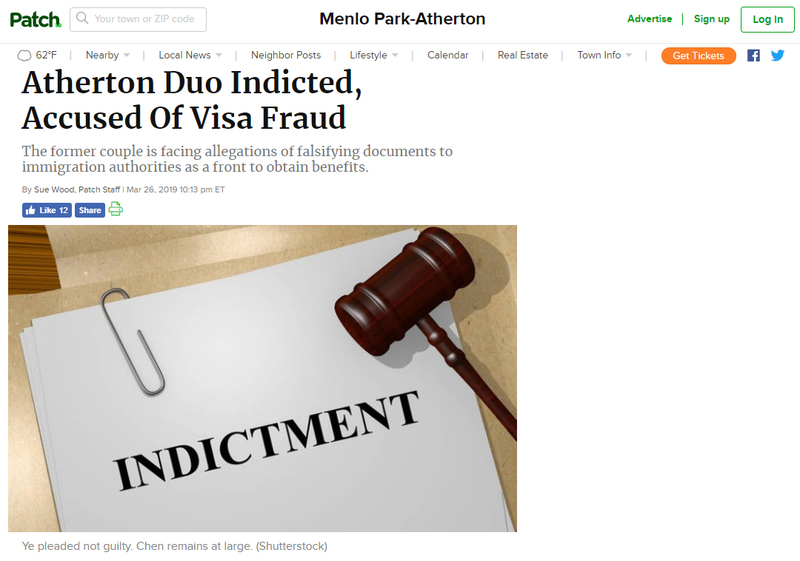 The former couple is facing allegations of falsifying documents to immigration authorities as a front to obtain benefits.

According to the indictment, Chen, 54, who runs the Law Offices of Jean D. Chen, and Ye, her 51-year-old former husband and office manager prepared and submitted to the U.S. Citizenship and Immigration Services fraudulent documents that contained false signatures and deceived the system in how the applicants would qualify for the EB-5 program.

Under the program, foreign nationals may obtain permanent U.S. residency, commonly known as "green card" status, by investing in qualifying American businesses. Alien investors who comply with program requirements initially receive a grant of permanent residency with conditions for a two-year period. After two years, alien investors may petition for permanent residency with a certain monetary threshold and other conditions depending on location and if regional centers are used.

Chen and Ye falsified supportive documents in falsely classifying their office as a regional center.

The indictment also charges defendants with obstruction of justice related to the investigations conducted by the U.S. Securities and Exchange Commission and the Federal Bureau of Investigations.

The duo is charged with and accused of visa fraud, obstruction of justice and aggravated identity theft.

Ye pleaded not guilty Monday before U.S. Magistrate Judge Susan van Keulen and was released on a $750,000 bond. His next scheduled appearance is for a hearing set on May 15.

Chen remains at large. According to court documents, Chen became a naturalized citizen of Dominica last October and left the United States about the same time the SEC filed its complaint against her. It is believed she is using her alias name.