As Grand Bohemian hits construction milestone, hotel is projected to open before RNC 2020 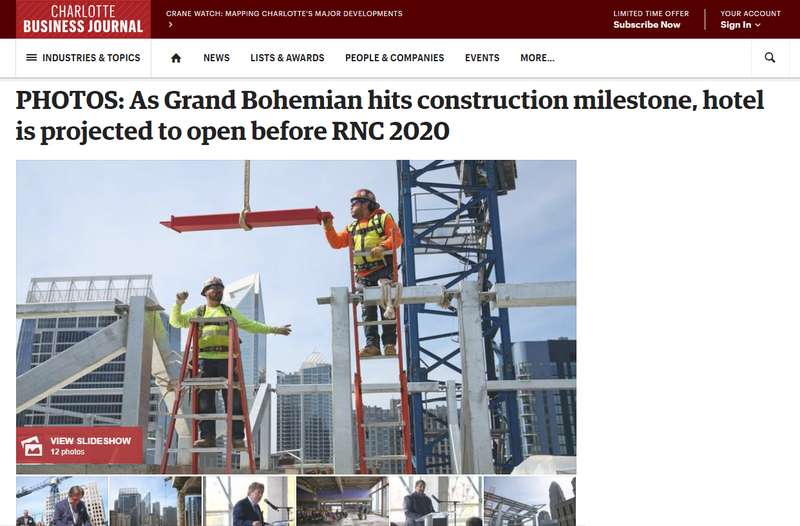 Executives involved in the development of a luxury hotel underway in uptown Charlotte gathered on a chilly Tuesday morning to celebrate the halfway point of construction.

The $110 million, 254-room Grand Bohemian Hotel at Trade and Church streets officially topped out several weeks ago but this week, members of the development firm, tradespeople, architects, the general contractor, interior designers and others formally celebrated the achievement by hoisting a beam on the 16th floor. The project, being developed by Orlando, Florida-based The Kessler Collection, is expected to open in March 2020, about a year from now.

John Luckett, chief operating officer at The Kessler Collection, said no two hotels by the developer are the same. This is the first hotel in Charlotte for Kessler, which so far has developed nine hotels, including Grand Bohemian hotels in Asheville; Charleston, South Carolina; Mountain Brook, Alabama; and Orlando, Florida. The Grand Bohemian flag is part of Marriott’s Autograph Collection.

The Charlotte hotel will have an Argentinian theme, with artwork and music throughout the hotel. In fact, pieces from the personal collection of Richard Kessler, the company's chairman and CEO, will be incorporated in the local hotel. 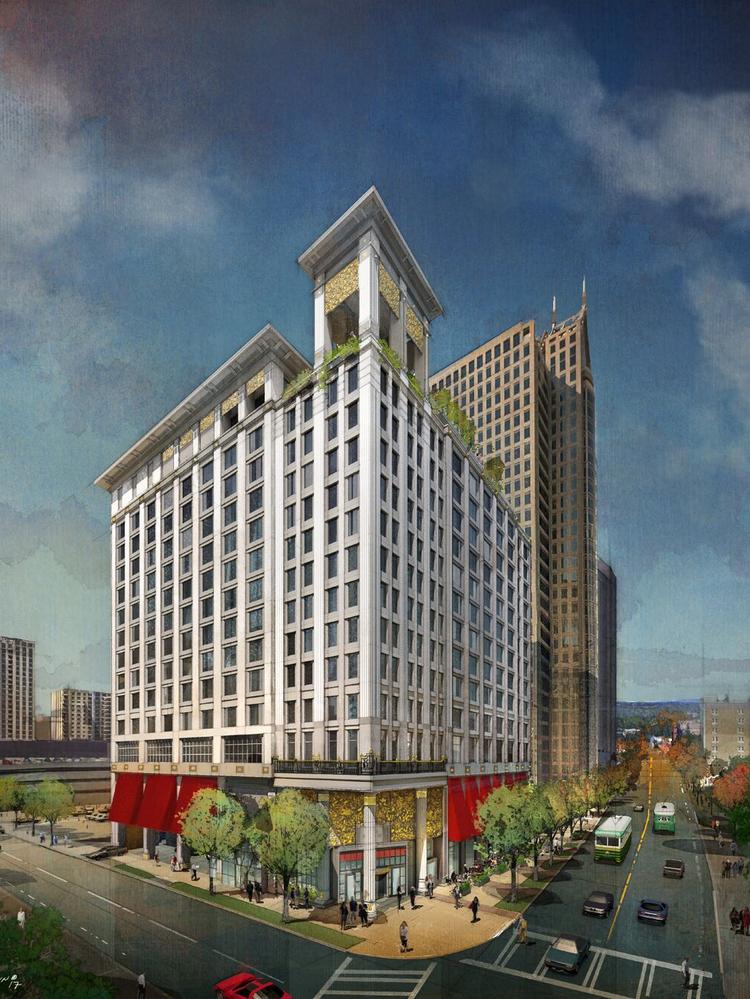 A 254-room Grand Bohemian Hotel is under construction at the corner of Trade and Church streets, with anticipated opening in March 2020.

"This hotel will be a very exciting place for this city ... the proof is in the pudding, and you’ll see the pudding come March," Kessler said.

The Grand Bohemian will include 32 suites in addition to an open-concept restaurant, a lounge and bar with sidewalk and park seating, Starbucks and, on the top floor, a rooftop bar, executive lounge, fitness center and spa. Meeting spaces will be throughout the hotel, including three breakout meeting rooms, a private dining room, a 4,400-square-foot ballroom and rooftop terrace.

More than 200 employees — or "grand performers," as Luckett called them — will be hired at the Charlotte hotel.

Josh McConaughey, vice president at JE Dunn Construction, said that despite recent weather conditions, the construction team has been able to deliver milestones and stick to a timeline. The Grand Bohemian is expected to be open just a few months before the Republican National Convention is hosted here in August 2020.

"Despite the rainiest year in recent memory, our trade partners were able to beat out our topping-out milestone that we set a year ago by one day," McConaughey said, adding the complexities of building uptown projects such as the Grand Bohemian "cannot be understated." The general contractor worked with Kessler on pre-construction for nearly two years before breaking ground last year.

The EB-5 program uses capital from foreign investors who invest a specific amount in a commercial enterprise that will create at least 10 full-time U.S. jobs per investor. In return, the investor can secure a green card. The program has seen success in other real estate markets but there's currently a backlog of investors, particularly from China, waiting to participate in the program.

"This hotel should be here 100 years from today — renovated probably once or twice along the way, but it will be here," Kessler said. "It's built to stand."