5 Common Misconceptions About Green Cards That Could Prove Costly 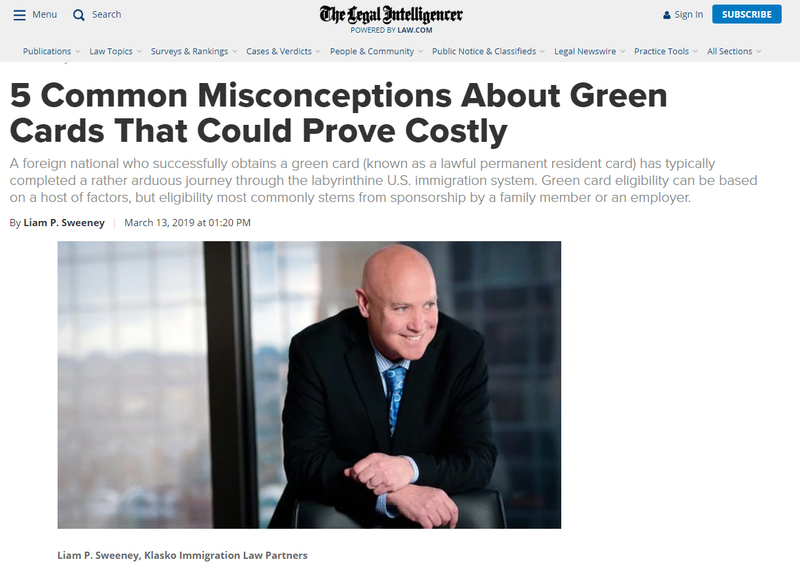 A foreign national who successfully obtains a green card (known as a lawful permanent resident card) has typically completed a rather arduous journey through the labyrinthine U.S. immigration system. Green card eligibility can be based on a host of factors, but eligibility most commonly stems from sponsorship by a family member or an employer. Within the employment category there is a preference category (EB-5) through which immigrant investors can obtain a green card if their investment meets certain criteria.

While the news headlines have been focused on illegal immigration at the border and talk of barriers constructed out of concrete, steel slats or chain link fencing (take your pick), over the past 24 months a much more pernicious barrier has been constructed in the form of subtle changes to immigration policy and procedures that have been quietly implemented in a way that has effectively limited legal immigration.

Given the current environment, after successfully obtaining a green card and becoming a lawful permanent resident (LPR), the green card holder should be careful to avoid taking (or omitting) any actions that could be construed by USCIS as an abandonment of his LPR status.

Below are some common misconceptions that could prove costly for green card holders. What follows is a discussion of basic misconceptions and is not intended to provide detailed information or analysis on each topic.

Because some LPRs travel frequently outside the United States, certain rules of law have evolved regarding the effect of such prolonged absences from the United States on one’s status as a permanent resident. If you are absent from the United States for a short period of time, generally you will not have any problems. Absences from several months to one year could result in an investigation as to whether you intended to abandon your permanent residency. In cases where a returning LPR is questioned upon attempted re-entry, especially following repeated absences of more than six months, the LPR should carry, and have available for inspection, evidence of his intent to remain a permanent resident. Such evidence may include: ownership of property, a residential lease, bank accounts, securities, other assets and investments, driver’s license, Social Security card, credit cards, confirmation of U.S. employment, financial support of relatives in the United States and final disposition of assets or employment abroad.

At the port of entry, if a CBP officer determines that there are grounds for closer scrutiny of a returning LPR, the LPR may be stopped by CBP officers and ushered into a secondary inspection where they are told they need to surrender their green card. This is admittedly a scary situation; however, while a green card holder does not have the same rights as a U.S. citizen, they do have a right to a hearing. As soon as a green card holder is told to go to a secondary inspection, they should immediately call an experienced immigration attorney if possible. CBP officers cannot revoke LPR status; it may be revoked only by an immigration judge. An LPR should not sign any papers, even if pressured by CBP, as signing indicates intent to voluntarily give up their green card and they will not be able to revoke such surrender.

All green cards have an expiration date but not all cards have the same validity period. In cases where the LPR has obtained the green card through a recent marriage or an EB-5 investment, the initial card is issued for a conditional two-year period. That conditionality can only be removed by filing certain petitions to remove conditions as prescribed by USCIS. Though the 10-year green card can be renewed, there are immense benefits at that point, if eligible, to apply for naturalization. Compared to the cost of green card renewal, submitting an application for naturalization is only slightly more expensive and the LPR will avoid any future hassle of renewing their green card again.

In order to obtain U.S. citizenship, the USCIS must conclude that the LPR has conducted himself as a person of “good moral character” and has not done anything to cause him to possibly lose or abandon his permanent resident status. Such conduct would include most criminal convictions or repeated and extended travel abroad. Specifically, the LPR must be physically present in the United States at least one half of the days during the five years immediately preceding a petition for naturalization. The LPR must also have no continuous absence from the United States of six months or more (without special approval from USCIS). Finally, you must be prepared to successfully pass a civics examination that demonstrates your knowledge of the fundamentals of U.S. civics and history, as well as your knowledge and application of the English language.

Travel issues pertaining to the naturalization process are critical, and the rules are completely independent of, and separate from, the rules for maintaining status as an LPR. In addition to travel issues, issues regarding dual citizenship may arise. These complex issues may require consultation with an experienced immigration attorney.

An LPR can be deported for certain criminal convictions and admissions. Such crimes include crimes of moral turpitude, aggravated felony, drug conviction, espionage, domestic violence, child abuse and more. If an LPR is arrested or charged with a crime, he should advise his immigration attorney immediately and schedule a consultation prior to any travel overseas to protect his immigration interests. LPRs can also lose their green card for immigration violations including fraud or misrepresentation of underlying petitions.

As green card holders LPRs enjoy certain rights such as:

However, LPRs do face certain limitations; they cannot vote or run for public office; are not eligible for federal government jobs; cannot travel abroad for long periods (without re-entry permits); cannot serve on juries; and, unlike U.S. citizens, LPRs can be deported.

Green cards present a huge step toward a stable long-term future in the United States, but they can be lost if U.S. immigration rules are not followed. When eligible, an LPR should seriously consider pursuing the naturalization process to further insulate himself from the vagaries of U.S. immigration law.