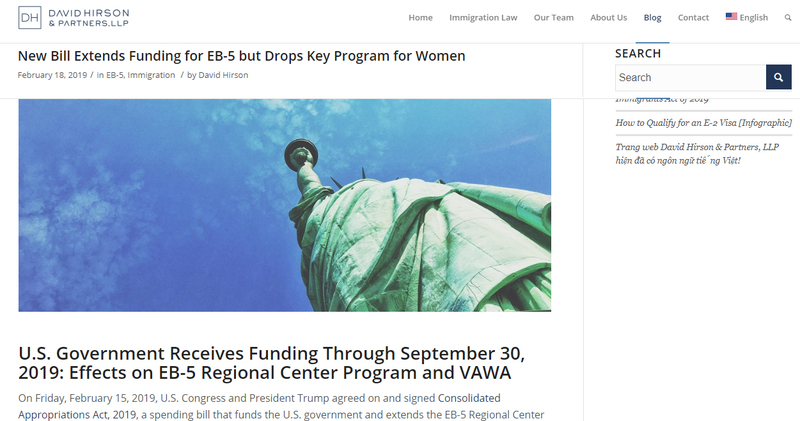 On Friday, February 15, 2019, U.S. Congress and President Trump agreed on and signed Consolidated Appropriations Act, 2019, a spending bill that funds the U.S. government and extends the EB-5 Regional Center Program with no changes through September 30, 2019. This is another “clean” extension in a line of short-term extensions since 2013 of the EB-5 investment and job-creation program. The EB-5 regional center program has been a benefit to local U.S. economies and U.S. workers. Along with the rest of the EB-5 industry, we hope that this seven-month extension will allow beneficial updates to be made to the EB-5 program.

It is interesting to note that one key U.S. immigration program was not reauthorized in this latest spending bill: The Violence Against Women Act (“VAWA”). VAWA was dropped from the spending bill near the end of intense negotiations to avoid another shutdown of the U.S. government. This U.S. government program was created in 1994 to fund programs that help victims of domestic violence. In addition to funding, VAWA created a special visa category that allows battered immigrants to petition for legal status in the United States without relying on abusive U.S. citizen or legal permanent resident spouses, parents or children to sponsor their Adjustment of Status (Form I-485) applications. The VAWA provisions in the INA allow certain spouses, children, and parents of U.S. citizens and certain spouses and children of permanent residents (Green Card holders) to file a petition for themselves, without the abuser’s knowledge. This allows victims to seek both safety and independence from their abuser, who is not notified about the filing.