EB-5 February 15th Update: What Investors can Expect for the Future of EB-5 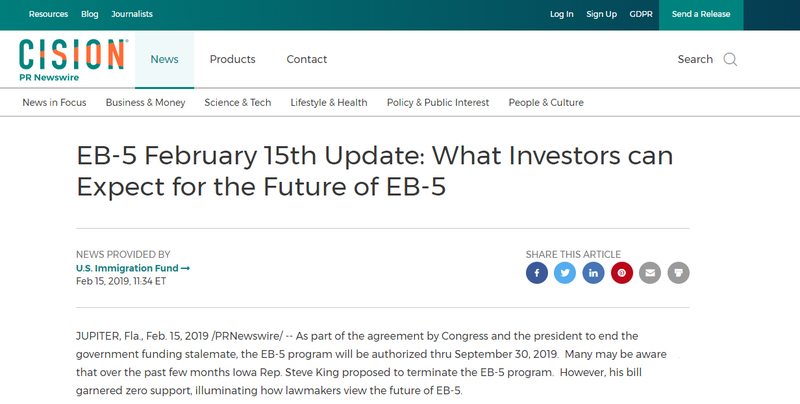 As part of the agreement by Congress and the president to end the government funding stalemate, the EB-5 program will be authorized thru September 30, 2019. Many may be aware that over the past few months Iowa Rep. Steve King proposed to terminate the EB-5 program. However, his bill garnered zero support, illuminating how lawmakers view the future of EB-5.

Ron Klein, partner at Holland & Knight and member of the firm's Public Policy & Regulation Group said, "separate from the Appropriations bills, there is new legislation being drafted, which includes visa relief, increase of the investment amount, and other reform provisions." He continued, "due to the new change of leaders in the house and the senate, who are expressing a more favorable view of the EB-5 program, we believe there is a better opportunity to pass legislation this year."

Between the government shutdown, and the temporary re-opening, few things have changed for EB-5. EB-5 regional centers have not been terminated and petition data for Q3 FY2018 remains unpublished. The only change during the defined timeframe is the U.S. District Court ruling which removes petition denials on the basis of investing loan proceeds not secured by the individuals own assets.

U.S. Immigration Fund (USIF) will continue to provide informed updates as the reauthorization of the program is announced. With the positive progress seen since the shutdown and re-opening of the federal government, optimism is high for future of the EB-5 program.