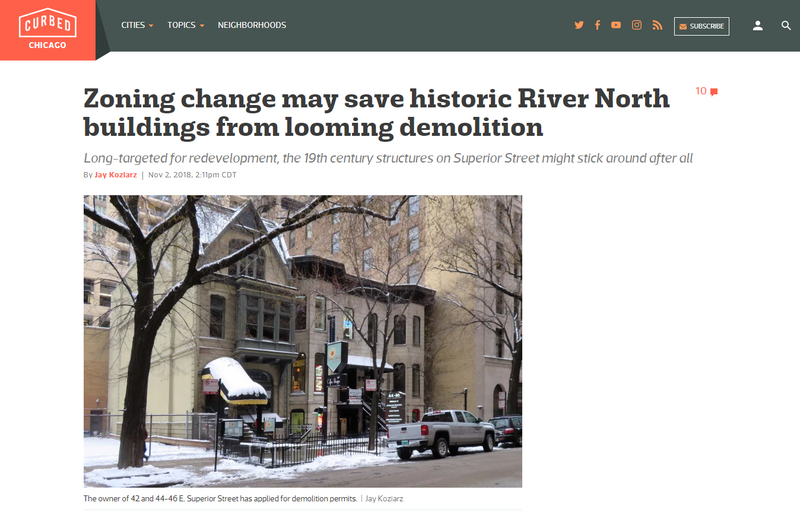 The owner of 42 and 44-46 E. Superior Street has applied for demolition permits.

Long-targeted for redevelopment, the 19th century structures on Superior Street might stick around after all

A cluster of old, Italianate style River North buildings threatened by redevelopment have caught the attention of 42nd Ward Alderman Brendan Reilly, who aims to delay their impending demolition by potentially downzoning the properties at 42 and 44-46 E. Superior Street.

The legislative move represents the second time that the alderman has derailed the plans of Symmetry Property Development, a group that purchased the buildings in 2016. The company’s previous proposal for the site, a 725-foot combination hotel and residential tower dubbed “The Carillon,” was rejected by Reilly last spring over traffic concerns. Although Symmetry hasn’t reveal its current plans for the site, it applied for demolition permits earlier this fall.

Due to their historical significance, the buildings in question carry an orange designation in the Chicago Historic Resources Survey, requiring that they be placed on a 90-day demolition delay list. Given that Symmetry applied for permits in mid-September, the old Superior Street structures were headed for a date with the wrecking ball as early as January.

Reilly’s newly introduced ordinance, however, would knock the parcels’ dense DX-12 zoning down to a DX-3—essentially slashing the amount of buildable floor area by three quarters. The proposed change is meant to “get the developer’s attention” and delay demolition beyond the standard 90-day hold, Crain’s reported on Thursday.

“It’s not intended to be a permanent zoning classification,” the alderman told the newspaper. “But I needed to use this to slow them down a bit and have them come back to the table and give us some more time to look at those buildings.” Extending the deadline will provide a chance for the city’s Commission on Landmarks to examine the buildings and determine if they are eligible for landmark protection, Reilly said.

Preservationists began a push to save the buildings, built in the 1870s and 1880s, when the corner was first reported to be in play for redevelopment back in 2015. Preservation Chicago’s Ward Miller says the buildings could contribute to a new “McCormickville” landmark district encompassing the area’s increasingly rare 19th century buildings.

The Superior Street cluster is only one example of River North’s rapidly disappearing historic character. In 2013, several older structures were razed to make way for Loyola’s Quinlan School of Business and a neighboring 35-story rental tower at State and Chestnut. In 2016, a pair of orange-rated, late 19th century buildings at 4 and 8 E. Huron Street bit the dust for a glassy 26-story apartment tower.

More recently, a trio of older rowhouses at 12-22 W. Erie Street were threatened by a proposed expansion of the neighboring Dana Hotel. The plan was later rejected by Alderman Reilly, temporarily sparing the old buildings. The elected official cited the Dana’s consistent behavior as a “bad neighbor”—and not historic preservation—as the reasoning behind his decision.

Reilly is certainly not shy about flexing his muscles when it comes to aldermanic prerogative on matters of zoning and development. In October, he announced that he had denied plans from Related Midwest to redevelop the former Chicago Spire site at 400 N. Lake Shore Drive with a pair of 1,100-foot and 850-foot towers—effectively stalling the project.