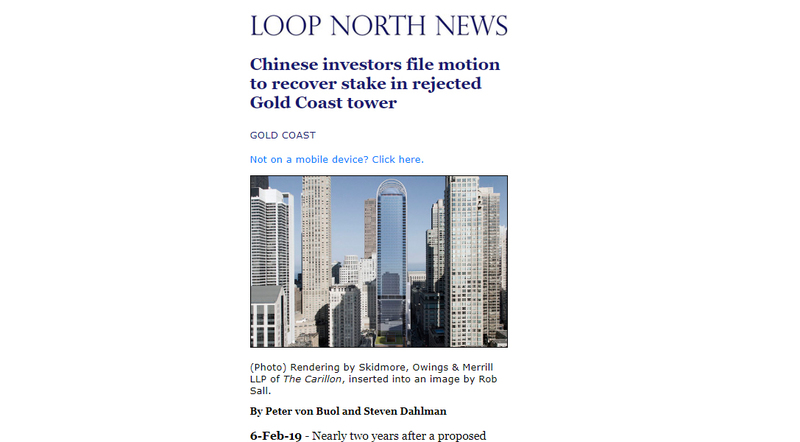 Rendering by Skidmore, Owings & Merrill LLP of The Carillon, inserted into an image by Rob Sall.

Nearly two years after a proposed Gold Coast hotel/condominium was not given city approval to proceed, an attorney for a group of 90 Chinese investors has filed a motion in United States District Court to compel the developer to disclose the location of $49.5 million of the investors' money.

The project, however, was rejected in April 2017 by 42nd Ward Alderman Brendan Reilly, who was concerned about its impact on traffic.

Each of the 60 investors contributed at least $550,000, hoping to secure an American visa through a federal program known as the EB-5 immigrant investor program.

Annabelle Yao, a Chinese citizen, is suing on behalf of herself and the other investors, all of whom reside in China and collectively invested $49.5 million in the project, money they now say they cannot get back. Seven defendants are named in the suit, including Symmetry Property Development and its managing partner, Jeffrey Laytin.

The tower would have replaced a trio of picturesque 19th century rowhouses that may still be demolished. Heneghan Wrecking & Excavating filed an application to demolish the buildings, but architectural preservationists won a 90-day demolition delay that will expire on March 9.

U.S. Immigration Fund, LLC, which acts as an intermediary between the U.S. government and foreign investors, says the defendants convinced the investors to withdraw their money from a mixed-use project in New York's Times Square.

They are seeking up to $23 million in compensatory and punitive damages. Litowitz disputes the claims, saying the complaint "is intended solely to harass and annoy."