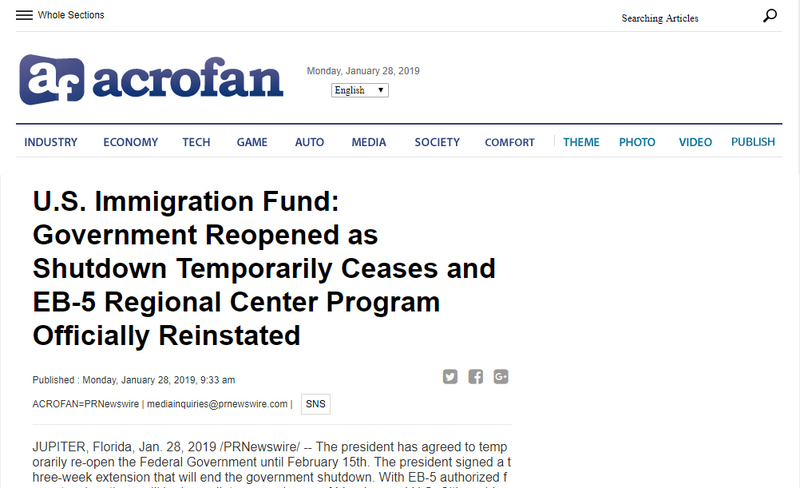 The president has agreed to temporarily re-open the Federal Government until February 15th. The president signed a three-week extension that will end the government shutdown. With EB-5 authorized for extension, there will be immediate reopening as of Monday, and U.S. Citizenship and Immigration Services (USCIS) will once again resume the receipt and processing of EB-5 applications.

So, what does this mean for the EB-5 Regional Center Program? As previously reported, most EB-5 operations continued during the shutdown due to the fact that USCIS is a self-funded agency in which revenue is derived from filing fees paid by immigrant investor applicants.

During the shutdown, there were two major restrictions for new and existing EB-5 investors – the pause on new immigrant visa interviews and the bar of participating investors from filing adjustment of status applications – these will no longer be in effect. As of Monday, business will be conducted as usual for all aspects of EB-5, at least until February 15th (the date on which the current short-term extension is set to expire).

Moving forward on the EB-5 Program legislation reform front, more positive news for the long-term future and success of the EB-5 Program is coming from Congress. Ron Klein, partner at Holland & Knight and member of the Public Policy & Regulation Group commented, "although the shutdown hampered some aspects of the U.S. government, the U.S. Congress has been in full operation and various members are continuing to work on different proposals to reauthorize and improve the EB-5 program. Due to a change in committee leadership in the House and Senate, there are now different and more favorable members who have control over EB-5 legislation. We are grateful for their interest and positive view of the program and are working closely with them on developing bipartisan legislation which will improve backlog issues and make the program more user friendly."