The Responsibility of Protecting the Investor First 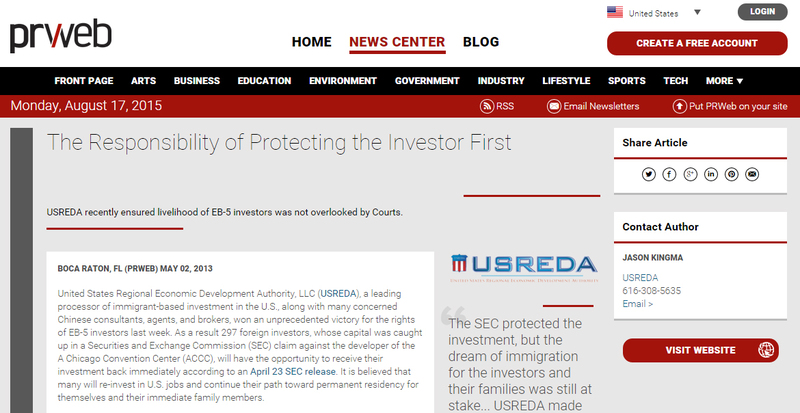 The SEC protected the investment, but the dream of immigration for the investors and their families was still at stake... USREDA made sure these individuals had a voice in the Court

United States Regional Economic Development Authority, LLC (USREDA), a leading processor of immigrant-based investment in the U.S., along with many concerned Chinese consultants, agents, and brokers, won an unprecedented victory for the rights of EB-5 investors last week. As a result 297 foreign investors, whose capital was caught up in a Securities and Exchange Commission (SEC) claim against the developer of the A Chicago Convention Center (ACCC), will have the opportunity to receive their investment back immediately according to an April 23 SEC release. It is believed that many will re-invest in U.S. jobs and continue their path toward permanent residency for themselves and their immediate family members.

According to court documents, in the case of U.S. Securities and Exchange Commission v. A Chicago Convention Center, LLC, Anshoo Sethi, and Intercontinental Regional Center Trust of Chicago, LLC, (Civil Action No. 13-cv-982), a judge for the United States District Court for the Northern District of Illinois ordered on February 6 that the ACCC project be stopped and the assets of Anshoo R. Sethi be seized while the Court addressed the alleged fraudulent activities levied against the project by the SEC. At that time 297 foreign investors had contributed to the project as part of the EB-5 pilot program, which gives foreign investors a path to residency in return for financing job-creating domestic projects with half-million dollars or more. However, the status of investors’ immigration to the U.S. was put in jeopardy when the project was stopped. USREDA provided a strong voice for priority and the rights of the individuals who had invested, motioning that the families be allowed to re-invest in other legitimate EB-5 projects.

“It was the right thing to do for the people involved,” Joseph Walsh, President and CEO of USREDA, said. “The SEC protected the investment, but the dream of immigration for the investors and their families was still at stake. In the United States, it often it takes many years to return seized funds in alleged fraud cases such as this one. By that time the window of opportunity for the investors and their families to gain U.S. residency could have closed. USREDA made sure these individuals had a voice in the Court. Thankfully, the Court immediately recognized the needs of these families and responded by giving the investors priority.”

An April 24 article from Financial Advisor Magazine reported that on April 19, the District Court's final order called for $147 million to be returned to investors immediately. All parties understood the need for the return of capital to be completed in a timely manner so that if they so chose the victims could re-invest their capital into a new project and remain eligible for EB-5 immigration.

“We were very pleased with and grateful for the outcome,” Walsh added. “We feel that the Court and the SEC did what was right by the investors. We know the Court is now free to wrestle with the alleged fraud and continue to ensure that the U.S. is still a land where the ‘Rule of Law’ considers the plight of the individual first and foremost. The United States is still home to the most stable and safe environment when considering investments worldwide.”

United States Regional Economic Development Authority (USREDA) is one of the largest and most respected processors of investment-based immigration (EB-5). By connecting investors with emerging organizations in key growth sectors such as innovation, real estate, tourism, and university and governmental infrastructure, USREDA is building wealth without borders for its clients.