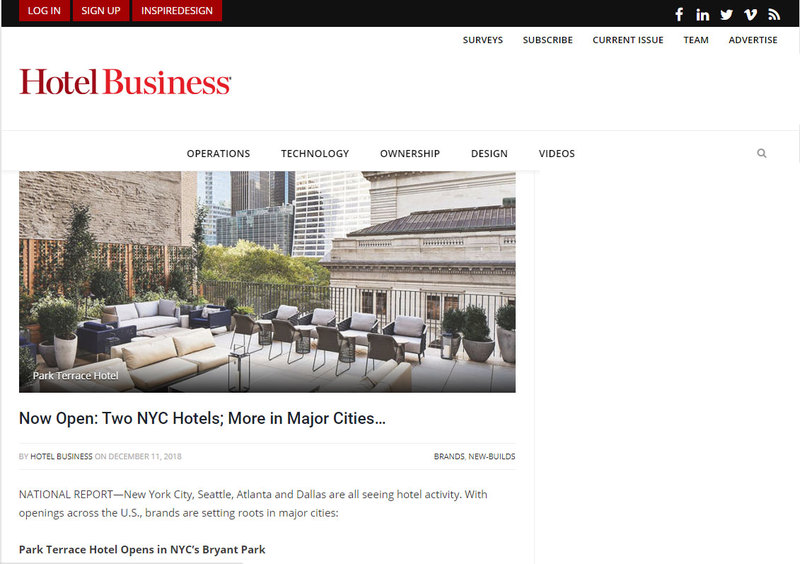 New York City, Seattle, Atlanta and Dallas are all seeing hotel activity. With openings across the U.S., brands are setting roots in major cities:

The hotel also has a total of 226 new guestrooms designed by Stonehill & Taylor. The hotel’s Terrazzo Lounge has views of the city’s skyline and landmarks—Bryant Park, the American Radiator Building, The New York Public Library and the Empire State Building.

The project was funded in part by U.S. Immigration Fund, through the EB-5 Program. The new Park Terrace Hotel is part of the first-ever residential condominium built on Bryant Park. Designed by architect, David Chipperfield, the EB-5 project is Chipperfield’s first ground-up residential tower in the United States.

Merrion Row Hotel and Public House is now open. The 28-room hotel with a pub and restaurant in midtown Manhattan nods to Ireland in its decor, food and service.

The 45-story hotel has 1,260 guestrooms, a fitness center, three on-site dining options and the Hyatt Regency Club lounge with fire pits and a wraparound patio. The hotel also has more than 103,000 sq. ft. of meeting and event space.

Waldorf Astoria Atlanta Buckhead is now open. The property, formerly Mandarin Oriental Atlanta, is the first for the brand in Atlanta. The hotel has 127 rooms and 10 suites, a spa, pool, fitness center, meeting and event space and dining options.

The hotel is close to attractions, such as Atlanta Botanical Garden, Georgia Aquarium and the High Museum of Art. The property is also close to shopping options, including the Lenox Square Mall, The Shops Around Lenox, The Shops Buckhead Atlanta and Phipps Plaza.

Art-Focused Hotel to Come to Dallas

Canvas Hotel Dallas is accepting reservations and scheduled to open on Jan. 1, 2019. Canvas has art-centric accommodations, a rooftop lounge and pool, meeting and event spaces and a new lobby restaurant.

Formerly known as Nylo Dallas South Side, Canvas is created and managed by Intrigue Hotels & Resorts, the independent lifestyle division of Interstate Hotels & Resorts. 76 art-infused suites and guestrooms have been renovated along with the lobby area and F&B outlets.