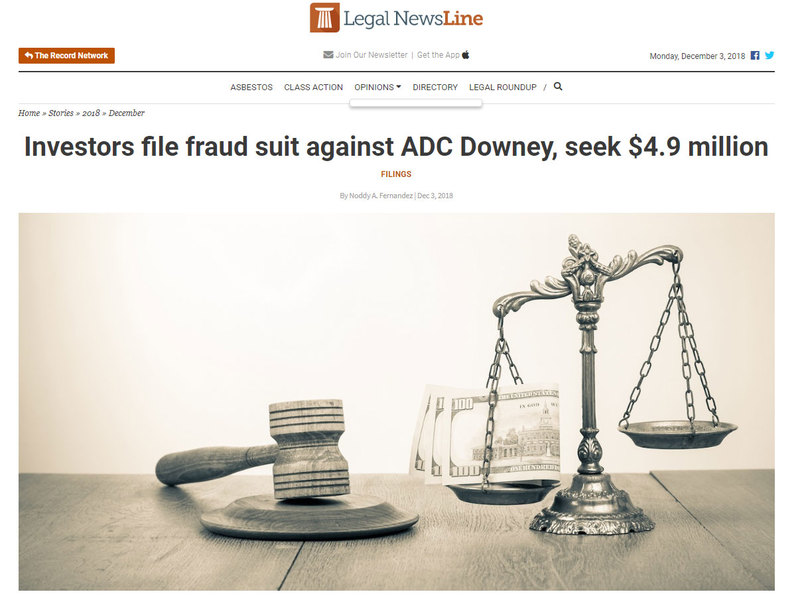 Chinese foreign investors have filed a suit against a Los Angeles-based partnership they subscribed to over allegations of fraud.

According to the complaint, plaintiffs are nine Chinese foreign investors who participated in the U.S. Government's EB-5 investor immigration program to obtain lawful permanent resident status in America. The plaintiffs allege they each subscribed to become investors in the ADC Downey LP with defendants by signing a subscription agreement and paying the fee price of $555,000 to defendants.

"In soliciting investments from plaintiffs, defendants omitted a critical EB-5 visa backlog issue, known as 'retrogression,' which creates a substantial delay of 10 years or more for investors from China to get a green card," the suit states. "Defendants were fully aware when they solicited investments from plaintiffs in 2014 and 2015 that plaintiffs' capital would need to be reinvested into a different project beyond the term of the partnership's initial investment."

The plaintiff holds ADC Downey LP and ADC Downey GP LLC responsible because the defendants allegedly misrepresented that the investment term was six to eight years and failed to disclose that as a result of the retrogression, the investment period would be many years longer than the term of the loan.

The plaintiff seeks judgment for damages in an amount of $4.9 million, plus interest, punitive damages, costs, attorneys' fees, and such other relief as the court may deem just and reasonable. They are represented by Matthew Sava, Shiyong Ye and Chris Han of Reid & Wise LLC in New York, New York.