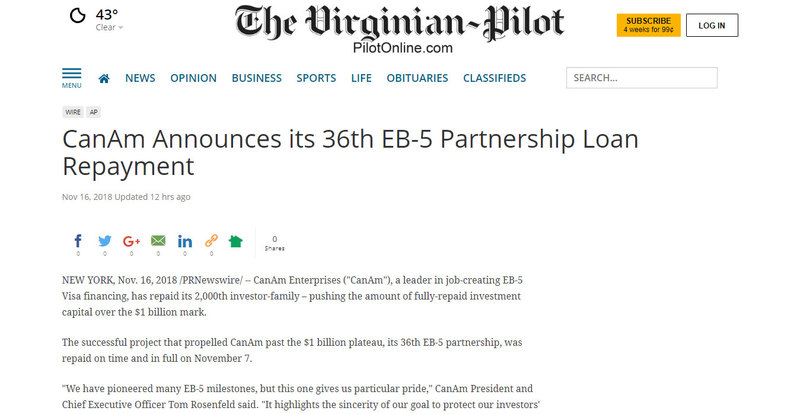 CanAm Enterprises ("CanAm"), a leader in job-creating EB-5 Visa financing, has repaid its 2,000th investor-family – pushing the amount of fully-repaid investment capital over the $1 billion mark.

The successful project that propelled CanAm past the $1 billion plateau, its 36th EB-5 partnership, was repaid on time and in full on November 7.

"We have pioneered many EB-5 milestones, but this one gives us particular pride," CanAm President and Chief Executive Officer Tom Rosenfeld said. "It highlights the sincerity of our goal to protect our investors' best interest - and our success in doing so."

The latest fully repaid investment was a $125 million loan through the CanAm Los Angeles Regional Center. The cash infusion was used to fund film and television productions in a targeted employment area located in Los Angeles County. A significant amount of California-based productions relocate to other states, or to Canada, where there are greater finance incentives, including film tax credits that California historically has not offered.

Operating as a financing incentive to keep these "runaway productions" in Los Angeles and to help create jobs in the United States, the EB-5 loan did indeed create and preserve important film production jobs in the region.

Originally formed to target investment projects in the motion picture and television industry, the Los Angeles Film Regional Center was approved by the United States Citizenship and Immigration Services (USCIS) in 2008. In an effort to broaden the scope of eligible projects for the EB-5 program in the Los Angeles area, an amendment was approved by the USCIS in 2009 to expand the target industries to include transportation, agriculture, alternative energy, and technology, in addition to film.

Overseen by the USCIS, the Immigrant Investor Program, also known as the Regional Center Program or EB-5 Program, provides qualified foreign investors with the opportunity to earn conditional visas in return for investing $500,000 in development projects located in high-unemployment areas that traditional lenders have ignored. Each investment by an EB-5 applicant must create or retain at least 10 permanent full-time jobs for U.S. workers. It is a win-win job-creation program that receives bipartisan support.

A number of EB-5 visas are set aside each year for participants who invest in commercial enterprises associated with regional centers approved of by USCIS, a unit of the U.S. Department of Homeland Security.

With three decades of experience promoting immigration-linked investments in the United States and Canada, CanAm has a long and established track record. Based its work on a reputation of credibility and trust, CanAm has financed 55 project loans and raised more than $2.7 billion in EB-5 investments. CanAm exclusively operates several USCIS-designated regional centers that are located in the city of Philadelphia, the commonwealth of Pennsylvania, the county of Los Angeles, the metropolitan region of New York, the states of Hawaii, Florida and Texas.