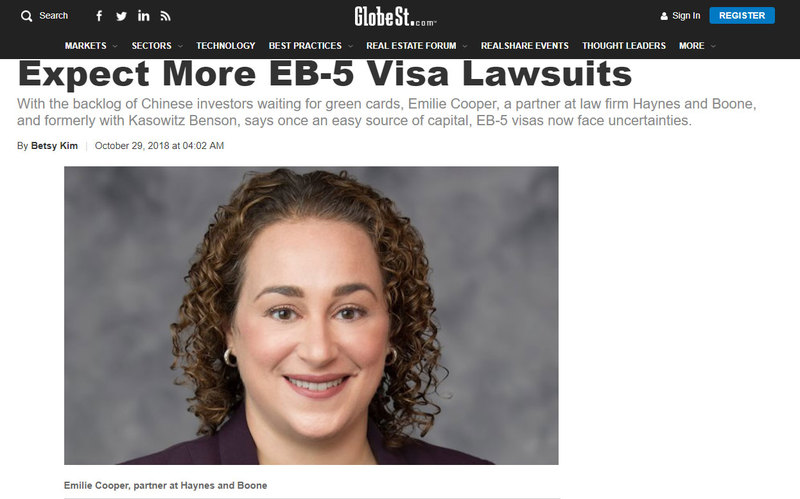 With the backlog of Chinese investors waiting for green cards, Emilie Cooper, a partner at law firm Haynes and Boone, and formerly with Kasowitz Benson, says once an easy source of capital, EB-5 visas now face uncertainties.

The EB-5 program was given an extension to Dec. 7 from its original expiration date of Sept. 20, 2018. But that alone is not going to solve some of its thornier issues—especially with Chinese investors.

The cancellation of the 630-foot Staten Island Ferris wheel that was going to be even larger than the 443-foot London Eye, the largest Ferris wheel in Europe, was a black eye for the borough. But it also provided another look at a major source of its funding—EB-5 investments.

Emilie Cooper joined Haynes and Boone as a real estate and litigation partner in July. She says there are uncertainties as to the future of the EB-5 visa program, which since 1990 offered a route to permanent residency in exchange for investing money in the US. Cooper points to questions that surround not only congressional reauthorization but also the backlog of investors waiting for green cards.

“With the backlog in visas, a traditional construction project may take five years. The backlog for visas is now longer than that. Because of the way the EB-5 program is structured, money needs to stay at risk until the green card is granted,” explains Cooper. “Because the construction projects don’t last as long as it takes to get the green card, issues have started cropping up as the backlog for visas has grown.”

There is a backlog particularly with the Chinese EB-5 visas, says Cooper.

The New York Times reported that the Staten Island Ferris wheel was supposed to cost $500 million in its entirety. But most of that money had already been spent. No Ferris wheel is in sight for the indefinite future. The publication noted that 412 foreign investors through the EB-5 visa program had invested a total of more than $200 million. The New York Times stated the majority of these investors were Chinese. The paper wrote CanAm Enterprises which brought in the investors said it “expected that they would remain on the path to American residency because the project had fulfilled most of the federal requirements for them to earn visas.”

EB-5 visas have suffered from reputation damage with scandals including the widely publicized SEC 2016 case against Jay Peak ski resort and its developers. In an August 2018 headline, Forbes magazine referred to the program as “fraud-tainted.”

Although not involved with the Ferris wheel or the Jay Peak case, Cooper deals with EB-5 issues as part of her professional terrain. In one of her current cases, she’s representing a developer in a lawsuit over EB-5 commissions. Prior to her current job, she was a partner at Kasowitz Benson Torres, a firm which represents Donald Trump, according to Miriam Rozen’s article in GlobeSt.com’s sister publication, The American Lawyer. Rozen notes Cooper has never represented Trump or his affiliated companies.

The president’s in-laws are no strangers to EB-5 funding. Jared Kushner’s sister, Nicole Meyer, made headlines last year for pitching the EB-5 program to Chinese nationals in Beijing seeking investments in Kushner Cos.’ One Journal Square in Jersey City, NJ.

Cooper notes the program has very little regulation. But high-profile failed developments and scandals could affect reauthorization and accompanying requirements.

“We are starting to see more now lawsuits arising from EB-5,” says Cooper. With the backlogs and with the need for the loans to remain outstanding before green cards are issued, she’s seeing more cases concerning the redeployment of money.

“Even if the program is not reauthorized, litigation will continue for several years to come. There are still all those loans outstanding,” she says. “There are a lot of them. For a long time it was very, very cheap money.”