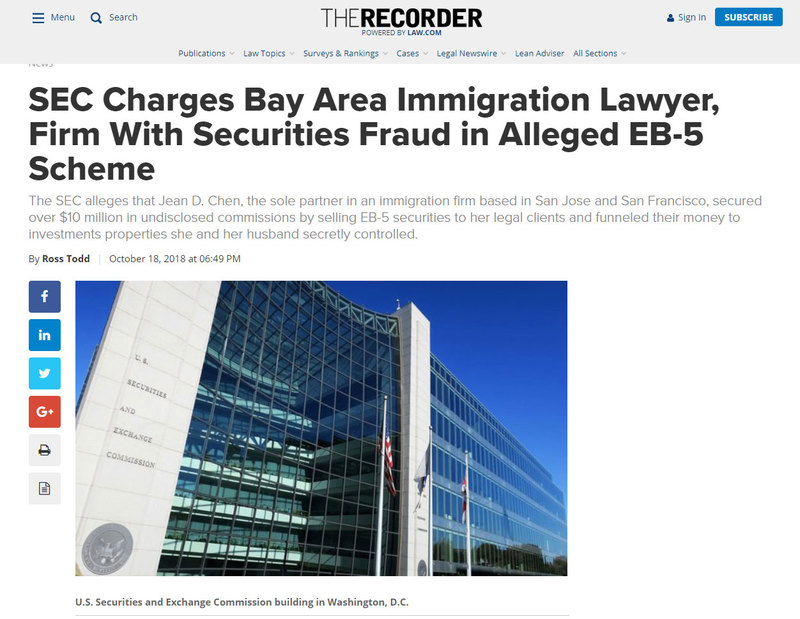 The SEC alleges that Jean D. Chen, the sole partner in an immigration firm based in San Jose and San Francisco, secured over $10 million in undisclosed commissions by selling EB-5 securities to her legal clients and funneled their money to investments properties she and her husband secretly controlled.

The U.S. Securities and Exchange Commission has charged a Bay Area immigration lawyer and her law firm with securities fraud claiming that they funneled clients’ investments into properties that netted the lawyer and her husband more than $12 million in undisclosed commissions.

In a complaint filed Thursday in the U.S. District Court for the Northern District of California, the SEC claims that Jean D. Chen, the sole partner in immigration firm Law Offices of Jean D. Chen based in San Jose and San Francisco, secured commissions by directing her clients to purchase certain offerings under the federal EB-5 immigrant investor program. The program gives preferential immigration treatment to foreign investors who put their money into certain job-creating projects in the U.S.

The SEC complaint claims that Chen and her husband Tony Ye, who served as the law firm’s office manager, funneled tens of millions of dollars in client money to investment properties they secretly controlled. The agency also contends Chen and Ye disguised their role in Golden State Regional Center LLC, an EB-5 regional center the SEC alleges the couple owns and controls.

Also named in Thursday’s complaint were Kuansheng Chen, a Hong Kong-based friend of the couple who is alleged to have acted as a figurehead to a Chinese immigration agency they controlled, and Kai Hao Robinson, an accountant whom the SEC alleges posed as the manager of Golden State Regional Center.

“When defendants became aware of the SEC’s investigation, they engaged in a cover-up operation, which included, among other things, refusing to produce documents, manufacturing exculpatory evidence, and scrubbing additional records in an attempt to obfuscate their involvement in the schemes,” wrote the SEC lawyers in Thursday’s complaint. “The conflict of interest created by Chen, Ye, and the Law Offices’ management and control of Golden State and its Bay Area projects would have been material to a reasonable investor’s investment decision.”

“Where conduct harms investors in our markets, attempts to stymie our investigation by fabricating evidence and withholding documents will not deter our efforts,” she said.

Lawyers for the defendants either declined to comment or didn’t respond on Thursday.

Thursday’s complaint claims that after Chen and Ye became aware of the SEC investigation in 2016, they attempted to scrub all mentions of the firm’s Beijing office, which shared an address of a Chinese immigration agency linked to the undisclosed commission payments. The SEC claims that even though Chen testified under oath during the investigation that the firm never had a Beijing office and she never told anyone that it did, a Beijing location was listed on the Law Offices’ website, brochures, retainer agreements and business cards in materials previously provided to investors.

The receptionist at the San Jose office of Chen’s law firm said she was out of the office at a meeting Thursday afternoon. She didn’t immediately respond to an email message seeking comment.