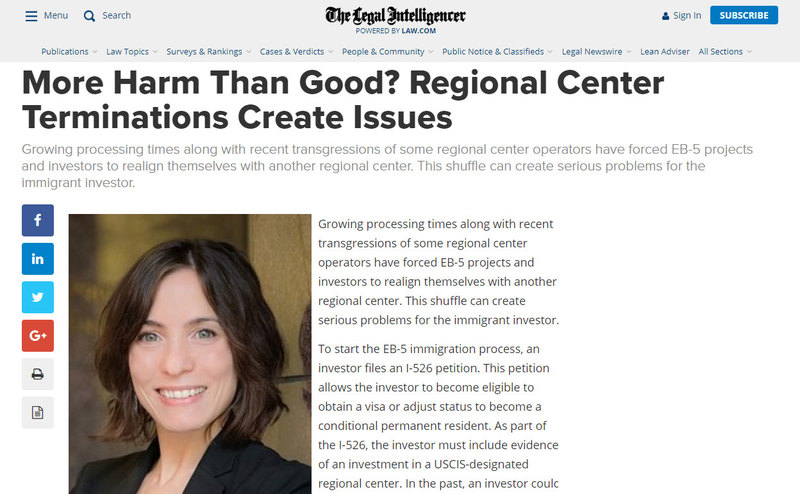 Growing processing times along with recent transgressions of some regional center operators have forced EB-5 projects and investors to realign themselves with another regional center. This shuffle can create serious problems for the immigrant investor.

Along with the power to designate an entity as a regional center, the U.S. Citizenship and Immigration Services (USCIS) also retains the right to terminate or revoke a regional center’s designation. Until recently, regional centers lost their designation only because of a lack of activity over the course of three years. Now, USCIS has taken the position that a regional center should be terminated if it has not sponsored a project that has successfully secured investors during the first three years of operation. This narrow interpretation of a regional center’s duties results in potential economic harm to regional center owners and operators but should not harm innocent investors. In recent years, however, USCIS has also terminated a number of regional centers based on charges of fraud or misappropriation or misuse of funds, EB-5 or otherwise. Such terminations, while purporting to protect the integrity of the program and its many participating investors, often result in fatal harm to the immigration goals of innocent investors USCIS claims to protect.

The USCIS policy manual (the policy manual) is the official online repository of its immigration policies and has a section that deals with its policies toward immigrant investors under the EB-5 program. Among other issues, the policy manual deals with the impact of a “material change” to an investor’s I-526 petition after the time the petition is filed.

USCIS explicitly states in the policy manual that “the termination of a regional center associated with a regional center immigrant investor’s Form I-526 petition constitutes a material change to the petition.” In contrast, it has also stated that such termination does not invalidate an I-829 petition. For those investors who have not obtained conditional resident status, USCIS’ decision to terminate a regional center effectively ends his or her EB-5 immigration process, erasing years of waiting and thousands of dollars in fees, not mention the potential loss of the investor’s initial $500,000 investment.

Given the severe consequences if a regional center is terminated, investors and projects might replace association with one regional for another in order to continue with the process. USCIS had been ambiguous about whether the substitution of one regional center for another is a material change, with no answer provided in the policy manual, statute, regulations, or precedential case law. The issue has only been addressed in nonprecedent decisions and the Nov. 7, 2017 USCIS EB-5 stakeholder’s meeting in New York, in which the Immigrant Investor Program Office suggested that the substitution of a regional center in the event of another regional center’s termination may constitute a material change. Only last month, USCIS updated the policy manual, an action requiring no notice or comment, to confirm this position.

USCIS’ policy decision to treat the termination or substitution of a regional center as a material change, while purporting to protect the integrity of the program, inflicts irreparable harm on innocent investors. Through no fault of their own, these investors stand to lose not only their investments, but more importantly years of time and the opportunity to immigrate to the United States. Their primary reason for participating in the EB-5 program comes to an unfortunate and avoidable end, as a consequence of a policy decision that causes far more harm than it prevents.

Jessica A. DeNisi is an associate in the Klasko Immigration Law Partners’ Philadelphia office and a member of the EB-5 practice. She works with developers and investors who seek to use foreign investment capital under the EB-5 program to fund job-creating projects.