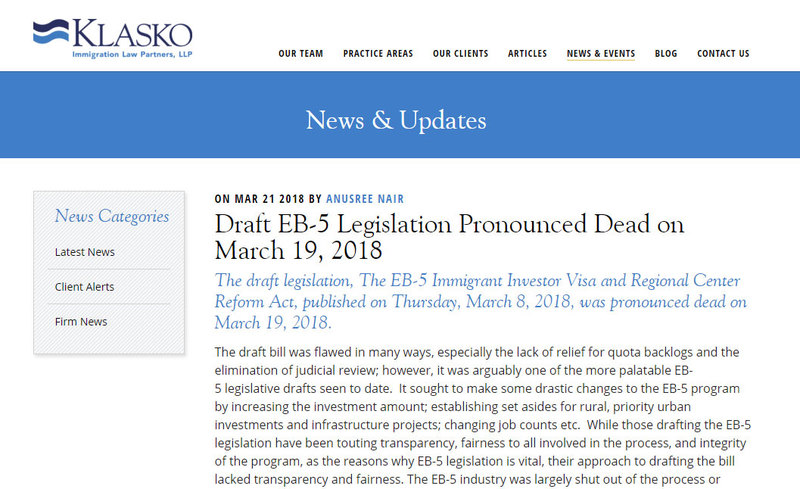 The draft bill was flawed in many ways, especially the lack of relief for quota backlogs and the elimination of judicial review; however, it was arguably one of the more palatable EB-5 legislative drafts seen to date. It sought to make some drastic changes to the EB-5 program by increasing the investment amount; establishing set asides for rural, priority urban investments and infrastructure projects; changing job counts etc. While those drafting the EB-5 legislation have been touting transparency, fairness to all involved in the process, and integrity of the program, as the reasons why EB-5 legislation is vital, their approach to drafting the bill lacked transparency and fairness. The EB-5 industry was largely shut out of the process or brought in too late to be able to provide meaningful guidance and input.

So it should come as no surprise that the proposed bill died the same way it began: in a secret, back-room agreement without the participation or input of the vast majority of the EB-5 industry.

But let’s get to the practical impact on investors and regional centers: As of today, a clean extension of the EB-5 program through September 30, 2018, is expected to be part of the omnibus bill – which is also facing hurdles in congress. If the omnibus bill does not pass and the federal government funding is extended through a continuing resolution, EB-5 would only be extended for the length of the continuing resolution. The proposed EB-5 regulations, which have been in the works for over a year, appear to have stalled in the OMB. If the regulations are passed, they would bring changes to the investment amounts without much advance notice. And, of course, Congress could pass EB-5 legislation before September 30, 2018. So while the March 23rd deadline appears to be moot, investors who wish to pursue EB-5 as an immigration option are advised not to wait until September 2018 to file.