The latest visa bulletin from the U.S. Department of State is a positive development for EB-5 investors because it shows that (1) the priority date for pending investors has jumped over a year for EB-5 investors from Vietnam and (2) EB-5 investors (except for Mainland China-born) are eligible to file their adjustment of status applications if they’re in the U.S. and otherwise qualified.

The October 2018 Visa Bulletin Board

With the 2018 fiscal year coming to an end, the United States Citizenship and Immigration Service (“USCIS”), in conjunction with the U.S. Department of State (“DOS”), issued the upcoming visa bulletin for October 2018 showing dates of action for both family-based and employment-based visa categories. The visa bulletin shows who is eligible to file for an immigrant visa abroad, or for adjustment of status within the United States based on the number of immigrant visas the DOS has made available at that time. The October 2018 Visa Bulletin reflects the following as “final action” dates for employment-based cases: 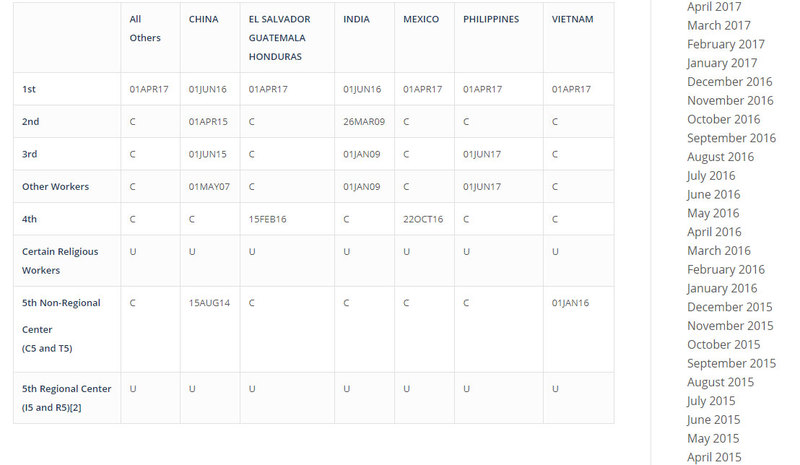 As illustrated in the highlighted column above, for those from Vietnam who filed EB-5 petitions under section 203(b)(5) of the Immigration and Nationality Act (“INA”), this visa bulletin presents promising developments in the adjudication process for those awaiting approval.

Every year, Congress allots 10,000 immigrant visas for the EB-5 employment-based visas, with 3,000 of those set aside for those who invested in Targeted Employment Areas (“TEAs”), and another 3,000 for those who invested in regional centers. Once again, the DOS will issue about 700 immigrant visas at the beginning of the 2019 fiscal year for Vietnam’s EB-5 investors.

Latest Priority Date for EB-5 Investors from Vietnam (January 1, 2016) & Effect on Pending Petitions
This visa bulletin allows those who received a priority date on their petition earlier than January 1, 2016 to apply for an immigrant visa abroad, or to adjust status in the U.S. This is a significant improvement from the prior final action date in the September 2018 Visa Bulletin, which only allowed immigrant visas for those with a priority date earlier than August 8, 2014.

Vietnam first experienced retrogression in May 2018 and has maintained a date of action around the end of July or beginning of August 2014 since that time. The new January 2016 action date indicates that the waiting period for those investors from Vietnam who filed EB-5 petitions will have a shorter waiting period for lawful permanent resident status in the United States. While the current wait time is approximately six years from the date of filing for Vietnamese investors, this two-year shift in final action date points towards faster adjudication and shorter times between approval and visa availability.

As one last piece of positive news, USCIS has announced that it will be allowing people to file their adjustment of status applications in the United States using the “Filing Date” chart below for the month of October: 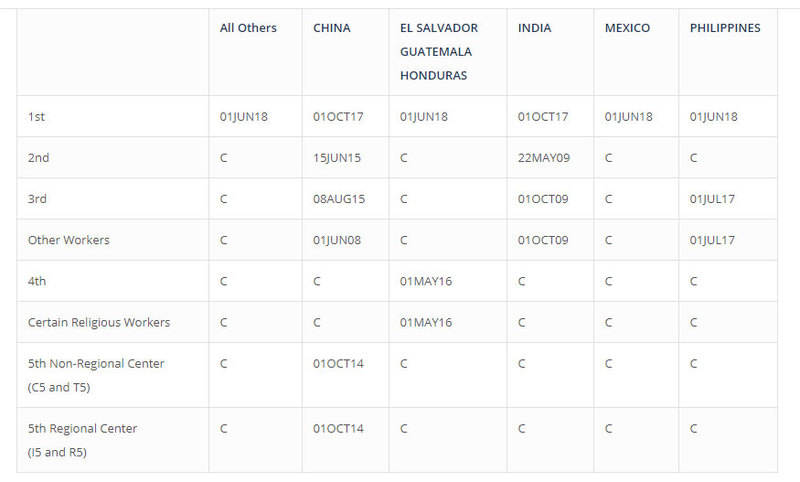 These dates are generally earlier than the final action dates posted above and are used when USCIS determines that there are more immigrant visas available than they originally predicted for the month. This is especially good news for Vietnam, as Vietnam does not have a separate category with retrogression for “filing dates” – it is current, allowing Vietnamese investors within the United States who have approved EB-5 petitions to file for their conditional permanent residence.

While nobody can predict how the visa bulletin will move in the future, on balance, the October 2018 Visa Bulletin is a positive development for Vietnamese EB-5 investors and we will continue to monitor the situation on behalf of our investors.