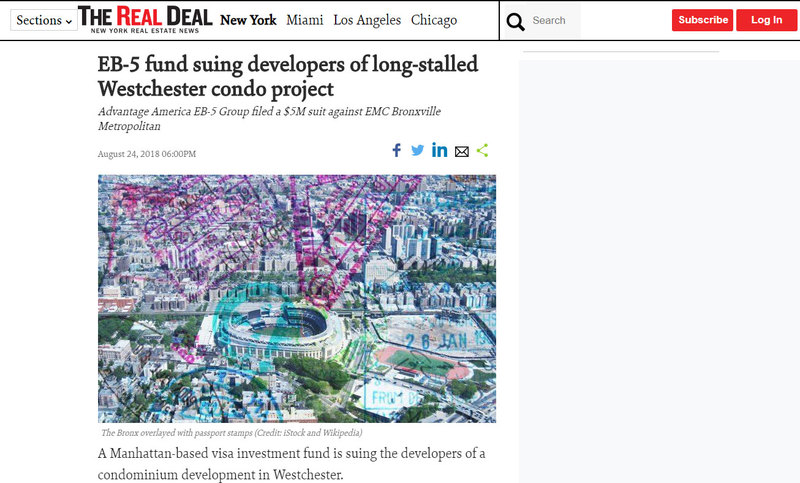 The Bronx overlayed with passport stamps

A Manhattan-based visa investment fund is suing the developers of a condominium development in Westchester.

EMC’s condo development has been stalled for years. The idea of converting the former warehouse into 61 luxury loft-style apartments was first floated when Metropolitan Life Insurance Company sold its premises at 759 Palmer Road in 2006.

In order to help get the plan off the ground, Advantage American brought an undisclosed number of EB-5 investors to the Bronxville development and provided EMC — then known as MetLoft — with $5 million in 2015.

But the developer now appears to be in default, with its contractors having filed an involuntary petition to bring EMC into bankruptcy.

Two months ago, on June 22, the project’s architect, Thomas E. Haynes; an engineer, Werner Tietjen; and Hall Heating & Cooling Service filed a motion to recover $201,678 in owed expenses. On July 23, the White Plains bankruptcy court relabeled the case as a bankruptcy procedure, providing EMC with the opportunity to reorganize and pay its creditors over time.

Extended by Congress earlier this year, the EB-5 visa program grants permanent residency to foreign nationals who invest at least $500,000 toward job-creating enterprises.