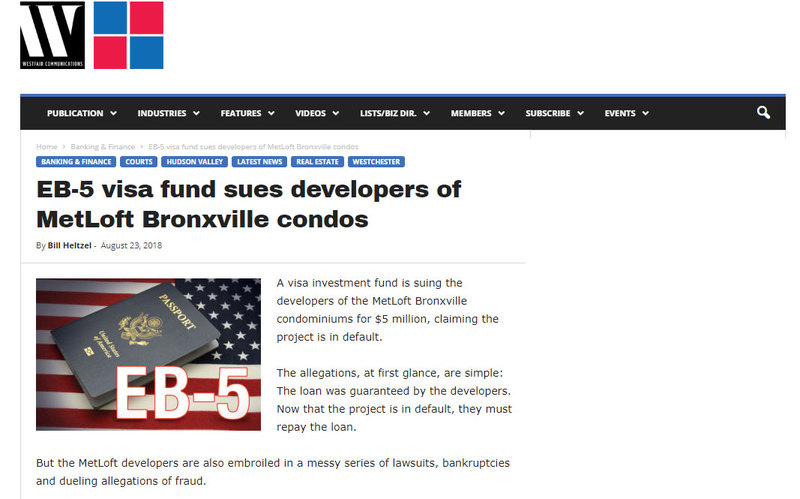 A visa investment fund is suing the developers of the MetLoft Bronxville condominiums for $5 million, claiming the project is in default.

The allegations, at first glance, are simple: The loan was guaranteed by the developers. Now that the project is in default, they must repay the loan.

But the MetLoft developers are also embroiled in a messy series of lawsuits, bankruptcies and dueling allegations of fraud.

The $5 million came from a fund operated by Advantage America EB5 Group in Manhattan, a firm that finances real estate projects with money from foreign nationals. Foreigners who invest $500,000 to $1 million in projects that create jobs in the U.S. can obtain EB-5 visas and permanent residency.

Advantage America loaned $5 million to the condo project in 2015, according to the complaint filed this month in New York County Supreme Court. The loan was allegedly guaranteed by the developers: Donald F. Wellington, his daughter Kerry Wellington, her former husband Michael Yanko, and WY Hospitality and Real Estate Group LLC in Nyack.

The condos are being built in a former Metropolitan Life Insurance Co. records warehouse at 759 Palmer Road in Yonkers. The plan was to build 61 loft-style, luxury apartments with indoor parking, an indoor pool and a fitness center.

But MetLoft, now known as EMC Bronxville Metropolitan LLC, defaulted on its loan obligations last year, according to the complaint.

Attempts to reach a lawyer who has previously represented the developers for comment failed.

That’s where the story gets complicated.

Four days before that action, another group petitioned the court to force EMC Hotels & Resorts LLC, operator of the Time Nyack Hotel, into liquidation. The Wellingtons and Yanko also invested in that project.

The petitioners in both bankruptcy cases are asking the court to appoint a trustee to protect their interests. They claim that Edgar Melo Costa, “a known fraudster,” has taken over both projects.

Court filings allege that Costa, a Portuguese national, claimed he had sold a private jet company for $450 million but actually owes $1.5 million to companies in Portugal “that he cheated out of money.”

Costa, the court filings stated, is associated with Brent Borland, who allegedly brokered MetLoft’s EB-5 financing. The U.S. Securities and Exchange Commission sued Borland in May for misappropriation of $6 million in an airport project in Belize.

A trustee must be appointed in the MetLoft bankruptcy, the petitioners said, to protect creditors from Costa.

Neither Costa nor Borland were named as defendants in Advantage America’s lawsuit.

“We work for Edgar Costa,” spokesman Chapin Fay wrote in an email, “who has been the target of a smear campaign by former business associates.”

The PR firm claims that the Wellingtons mismanaged the condo and hotel projects and that Costa discovered “several instances of possible illegal activity” that contributed to the poor financial performance on the hotel project.