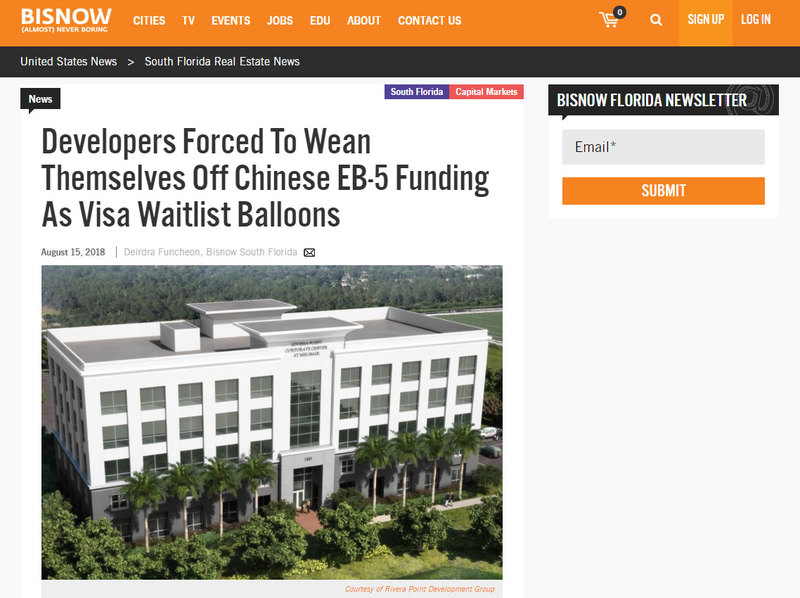 The EB-5 program, for years a reliable source of capital for builders in Miami, New York City and other major U.S. cities, has been beset with fraud, long waits and uncertainty.

Chinese investors, who made up 85% of all EB-5 investors, are now facing up to a 15-year wait between the time they file their initial petition and the time they receive a green card. With such a backlog, developers are turning to investors in other countries — or giving up EB-5 funding entirely.

Thanks to a 1990 federal law that created the EB-5 program, wealthy foreigners can invest $1M in U.S. projects — just $500K in “targeted unemployment areas” — that create jobs and, in return, get green cards for themselves and their family members. Especially since the Great Recession, Miami has been a magnet for EB-5 money: it is an attractive destination for foreigners, and has plenty of neighborhoods that fit the bill for qualifying projects.

For years, China led the way in EB-5 applicants. Even when the process went smoothly, it could take four years from application to green card. But no country is allowed to receive more than 7 percent of the EB-5 visas offered, and China is the first to reach that cap.

The shift “affects every project everybody’s working on,” said Ronnie Fieldstone, an attorney with Saul Ewing Arnstein & Lehr who frequently represents developers or the regional centers that help match investors with projects.

In his nine years working on EB-5 deals, he has facilitated close to $8B of funding, including deals up to $400M, he said. His major projects include hotels near Miami International Airport and the Paramount Miami condominium.

Although developers gobbled up EB-5 money after the housing crash and the Great Recession when bank lending was sparse, today, Fieldstone said, they don't need what is commonly called the "cash-for-visas" program.

"The expectations of raising money are less," he said. "It’s hard to get $200M on a transaction. You could get that three years ago, but it’s very hard today. As China retrogresses, they have been more modest in their requests for capital.”

He said developers he works with are now fanning out to Brazil, Colombia, Europe and the Middle East to solicit investors.

Rodrigo Azpurua, with Riviera Point Development Group, said that he has worked with more than 100 EB-5 investors on five projects since the early 2000s. But nowadays, he doesn’t even bother trying to lure investors with the promise of a green card; rather, he focuses on their desire to invest in low-risk, U.S.-based projects and make good returns.

“My first project was $17M, and I raised half of it with Chinese money,” Azpurua said, speaking of his 72K SF office park in Miramar, which was built entirely with EB-5 funding.

He met potential investors at trade shows and his company showed off its portfolio on social media. He connected mainly with entrepreneurs who wanted to secure visas for their teenage kids to attend college in the U.S. Back then, he said, the waiting period was shorter, so parents were applying when their children were 17.

Azpurua has since built a 46K SF office in Doral, a 76K SF corporate center in Miramar, a Radisson Red hotel near the Miami airport and a La Quinta in Orlando, using less EB-5 money each time. His second project was funded with 80% EB-5 money, and his most recent, only about 25%. 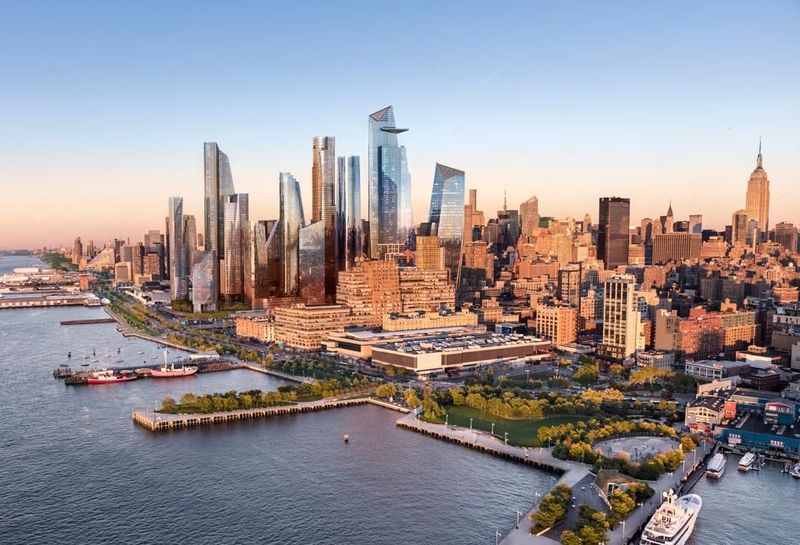 Related/Oxford Hudson Yards in Manhattan is the largest mixed-use project in the country, and was financed with hundreds of millions in EB-5 investment dollars.

Azpurua said that although his Chinese investors put their money into South Florida projects, once their their families obtained visas, they mostly chose to live in the Pacific Northwest. Investors from his early projects referred their friends, he said.

Many have become disillusioned with long waits for visas, and are forgoing the EB-5 program but investing private equity in his projects anyway, so long as he offers higher returns than they would get with an EB-5 project, which has the value-add of the green card. Azpurua said banks have eased lending requirements, so he also uses traditional debt to partially finance projects.

The EB-5 program has also seen its share of fraud. In South Florida, one developer was tied to a fraud-ridden Vermont project, Jay Peak, and in early August, the Securities and Exchange Commission brought charges related to the Palm House hotel. Members of Congress have called for the program’s reform. It has been seen as unfair to offer visas for millionaires, as though citizenship is for sale, while the country struggles to handle refugees who show up at the border, but are poor.

Jared Kushner’s family famously was criticized, then investigated, for playing up its ties to President Donald Trump while touting a New Jersey project to potential Chinese investors.

The current incarnation of the EB-5 program sunsets at the end of September.

“The expectation is that, just like the last 13 or 14 times, it will be extended,” Fieldstone said. “Immigration is a hot button issue, so nobody’s going to tackle this before the election, and nobody’s going to do anything before next year.”

Azpurua said that the constant uncertainty around the program is forcing developers to be less reliant on it.

“Since 2015 there have been these short extensions — 30 days, three months, six months, a year — it has happened several times since 2015 to now," he said. "All the time, with a new proposed bill, there’s talk about increasing the amount [to be invested], or redefining the employment areas [where jobs must be created]. With all that uncertainty, it’s a great product, but it’s got to make up a smaller portion of the capital stack.”