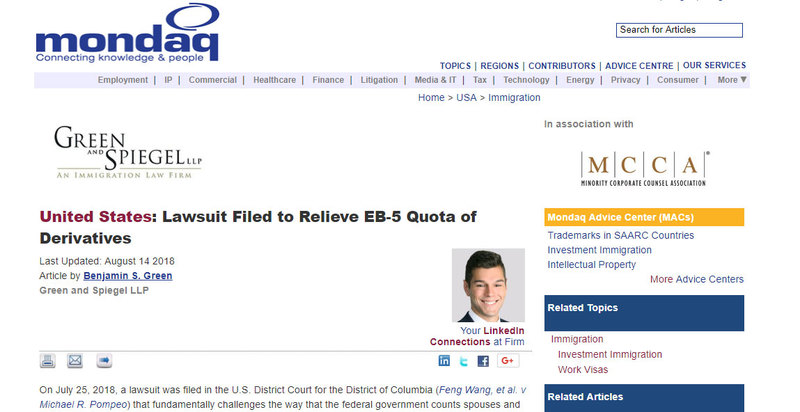 On July 25, 2018, a lawsuit was filed in the U.S. District Court for the District of Columbia (Feng Wang, et al. v Michael R. Pompeo) that fundamentally challenges the way that the federal government counts spouses and children when determining the annual limits for the EB-5 immigrant visa category. Under present law, EB-5 admissions are limited to approximately 10,000 per year, including not only investors but also their spouses and minor children. While relegated to the context of the EB-5, the lawsuit has the potential to significantly reshape legal immigration across a wide range of categories.

The suit directly challenges the Department of State's interpretation of EB-5 visa allocation, which effectively reduces the number that can be issued to investors each year. Specifically, it alleges that the Immigration and Naturalization Act's plain language requires that approximately 10,000 visas be made to investors each year, the Department wrongfully counts the spouses and children of investors against the annual visa allotment set. The complaint cites Congressional proceedings supporting legislative intent that these family members should not be counted against the visa limit.

Under present interpretation, substantially more than half of the annual allotment of EB-5 visa numbers are exhausted on the spouses and children of investors, rather than investors themselves. Per the Cato Institute), in Fiscal Year 2017 by counting spouses and children against the EB-5 limit of about 10,000 green cards, the State Department has effectively reduced the quota for investors by almost two thirds. Rather than the full 10,000 going to investors, the government provided green cards to only about 3,500 investors. This issue is especially acute with Vietnamese families (the second-largest source of EB-5 petitions in the world) where family sizes tend to be relatively large.

The Plaintiffs allege that the Department of State's "Counting Policy" unlawfully erodes the number of visas available for actual investors, prolongs waits, separates immigrant families, and undermines investments into the U.S. economy and workforce.

Indeed, given the massive gap between those whose EB-5 petitions have been approve and those whose Immigrant Visas have actually been processed, significant backlogs have been created. Of particular concern in the suit is the effect that these backlogs that have for the separation of families in the form of children of investors having face the harsh reality that they risk becoming ineligible when they reach 21 and "age-out" of the process.

Certain countries feel the pain of these backlogs more than others. Take for example, the waiting time for someone born in Mainland China. As a result of the policy, otherwise-qualifying Chinese immigrant investors in 2018 have to wait an estimated 15 years to receive their permanent residence. Many EB-5 applicants have already had their children age out, and this number stands to increase in the years to come. The lawsuit seeks to protect the remaining children from losing their opportunity to immigrate with their parents.

Notably, the Court's decision could apply with equal force to other preference categories—in both the family and employment-context—with a potential outcome that could solve the problem of unworkable waiting times for Green Cards. However, the immigration community will have to wait and see with bated breath as to what the D.C. District Court determines, as well as any further decisions upon appeal.