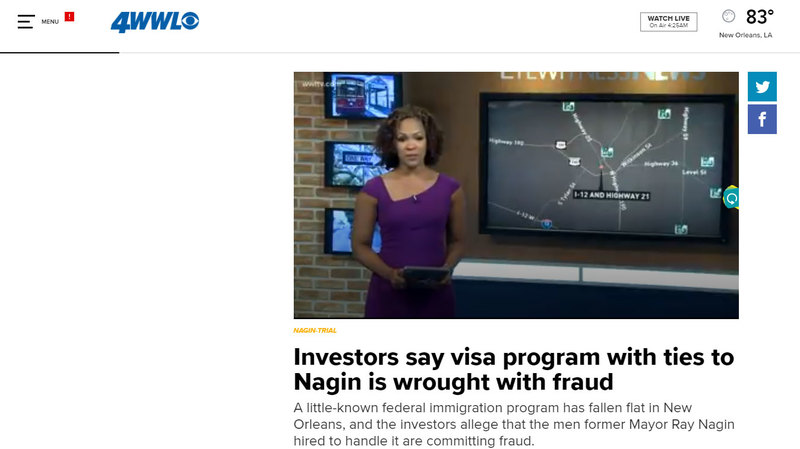 A little-known federal immigration program has fallen flat in New Orleans, and the investors allege that the men former Mayor Ray Nagin hired to handle it are committing fraud.

A little-known federal immigration program one that's created thousands of jobs and brought billions of dollars in investment to other American cities and towns has fallen flat in New Orleans, and the investors allege that the men former Mayor Ray Nagin hired to handle it are committing fraud.

It's called the EB-5 Visa program. Foreign investors who give at least $500,000 to designated investment centers, including New Orleans, get visas to live and work in the U.S.

If 10 New Orleanians get jobs after two years, the investor gets a green card.

In 2006, Nagin signed an exclusive 30-year deal with Maryland businessmen William 'Bart' Hungerford Jr. and Timothy Milbrath to run the city's EB-5 operation. They called their company NobleOutReach, and initially, the process seemed to be on the right track.

Hungerford and Milbrath recruited 31 investors and collected $15.5 million for a pooled investment fund. They wooed investors by claiming they had opened five eateries and had big hotels under construction. They said their projects would create 1,500 jobs here.

The week before the New Orleans Saints' historic Super Bowl victory, they cleared away a blighted complex on Gen. DeGaulle Drive in Algiers. City officials wielded gold hammers and ceremonially smacked them into the spray-painted word 'Colts.'

The air was just as festive a year later, in December 2010, when Hungerford and Milbrath broke ground on their biggest project.

'This is groundbreaking and hopefully a little over a year from now, we'll be opening the door to a WOW restaurant, conference center, training facility that will be out here on the front side and a hotel on the backside,' Hungerford said.

Community leaders bought in. The City Council president and vice president at the time, Arnie Fielkow and Jackie Clarkson, sang NobleOutReach's praises. And Christopher Kane, the president of the Algiers Economic Development Foundation, said he was convinced the project was off to a 'quick start' and would be 'a real project.'

More than two years later, the site is just an empty lot. Rusty girders dropped there a few months ago are the only signs of possible activity. The neighbors say they don't even cut the grass.

So, where did all the money go? According to 27 of the foreign investors who are now suing in federal court, most of it went into Hungerford and Milbrath's pockets.

Ledgers collected by the plaintiffs through the lawsuit show some 30 investment companies set up by Hungerford and Milbrath, with names like Bartone (Bart One) and Timone (Tim One), Bay-Bourbon-Ritas, Bay-NOLA-Hospitality, Bay-NOLA-Ventures-MD, VP-NOLA, VP-NOLA 1, VP-NOLA 2 and VP-NOLA-WOW.

The plaintiffs allege that they formed the companies to make it hard to follow the trail of investors' cash. The ledgers show money transferred from the investment fund to one of those companies one day and nearly the same amount transferred out to NobleOutReach a few days later.

In one case detailed in the lawsuit, the investment fund spent $4.1 million to buy a 10-percent share in VP-NOLA, an entity ostensibly set up for building a Value Place hotel. Meanwhile, the investors allege that Hungerford and Milbrath paid just $100 and got a 90 percent share of VP-NOLA.

And the investors also allege that $1.8 million of their money went to pay for salaries in Maryland, including, allegedly, paychecks to Hungerford, Milbrath and their wives.

And it's not just how the money was spent, but how Hungerford and Milbrath sold the plan to investors. The lawsuit includes emails by Hungerford to potential investors promising five new hotel projects in 2010. As early as 2008, he was claiming that they had already created 'five times the number of jobs necessary' for all of the investors to get green cards.

But the investors say that Hungerford and Milbrath were ignoring what the U.S. Citizenship and Immigration Service was telling them: That the main recipient of the funds, their Bay-NOLA-Mgmt consulting firm, was not a qualified job-creating entity for the New Orleans center. The lawsuit alleges that they put at least $500,000 of the investment dollars into that enterprise after it had already been rejected by the feds.

The EB-5 center's only physical address in New Orleans is actually the offices of the Algiers Economic Development Foundation, a local non-profit. The former president of the AEDF is Christopher Kane, who so ebulliently welcomed Hungerford and Milbrath to New Orleans and proclaimed the hotel and conference center a 'real project.' He is now Hungerford and Milbrath's attorney in the lawsuit.

Hungerford and Milbrath have yet to specifically answer the central allegations of fraud in the lawsuit. They have only made procedural arguments, such as an effort to contest the federal court's jurisdiction and an attempt to get the plaintiffs' attorneys dismissed because one of the lawyers once worked for Hungerford and Milbrath.

When I spoke with Hungerford and Kane, they both declined to comment, other than to say the central allegations of fraud are false. Milbrath did not respond to messages seeking comment.

Ryan Berni, Mayor Mitch Landrieu's spokesman, said the current mayor is very concerned about the allegations in the lawsuit and is frustrated by the agreement Nagin signed.

Berni said they are eager to cancel the 30-year memorandum of understanding that turned the city's regional EB-5 investment center over to NobleOutReach. But, he said, they fear that canceling it now would cause even more trouble for the suing investors, who are still hopeful they can qualify for green cards.

What makes this even tougher for the investors is that some of the NobleOutReach projects have been successful and created jobs, but the U.S. Citizenship and Immigration Service is not counting those jobs toward the number that must be created for the investors to get green cards.

The fund bought into three PJ's coffee houses (two at Tulane University and one on Canal Street downtown), the Rita's Tequila House on Bourbon Street and Maurepas Foods, a Bywater restaurant and cocktail bar that opened one year ago.

Maurepas owner Michael Doyle said he never could have employed 32 people and become an anchor for the neighborhood without the EB-5 investments.

'We wanted to buy a lot of well raised and really quality things from local farmers. We wanted to employ folks, sort of create a small community here. We wanted to rehabilitate a building, open a restaurant, serve food, maybe have fun, make a couple of bucks at it, and we've done that,' Doyle said. 'So ultimately, my view is fairly positive, but again, I'm kind of in the dark' about the fate of the investors.

Hungerford and Milbrath wrote a letter to their investors in 2011 that USCIS would now only count the jobs created at the Algiers hotel, conference center and WOW Cafe project.

That's zero jobs, so far. And that's why some investors now face deportation.

'This entire episode has been extremely wrenching for them,' lead plaintiff attorney James Rodgers said. 'They have put out their money, they've put out their time. They played by the rules and now they face complete loss of their effort after having been invited in to help make an investment to improve things in the city of New Orleans. And as it turns out, everybody seems to be losers in this.'