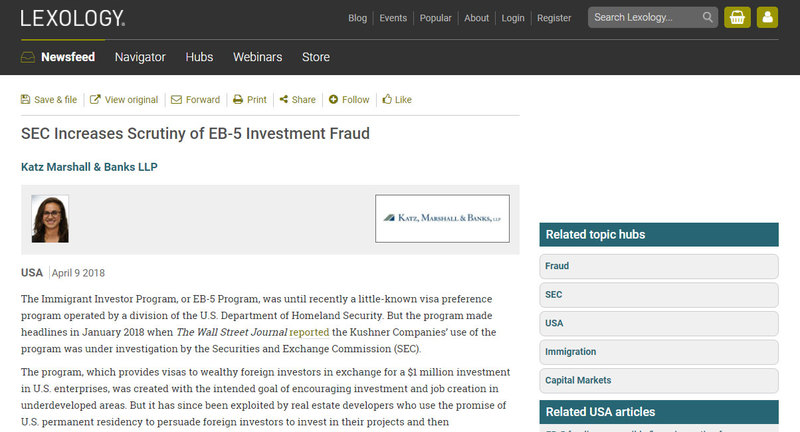 The Immigrant Investor Program, or EB-5 Program, was until recently a little-known visa preference program operated by a division of the U.S. Department of Homeland Security. But the program made headlines in January 2018 when The Wall Street Journal reported the Kushner Companies’ use of the program was under investigation by the Securities and Exchange Commission (SEC).

The program, which provides visas to wealthy foreign investors in exchange for a $1 million investment in U.S. enterprises, was created with the intended goal of encouraging investment and job creation in underdeveloped areas. But it has since been exploited by real estate developers who use the promise of U.S. permanent residency to persuade foreign investors to invest in their projects and then misappropriate the investors’ funds for their own use.

In 2016, the SEC made EB-5 fraud one of its examination priorities, a signal that the program “present[s] potentially heightened risk to investors and/or the integrity of the U.S. capital markets.” The SEC has also awarded significant sums to individuals who report EB-5 fraud under its Whistleblower Program.

The EB-5 Program was created by the Immigration Act of 1990 and is one of five employment-based (“EB”) visa preference programs administered by U.S. Citizenship and Immigration Services. Under the program, non-citizens who invest $1 million in a new “commercial enterprise” that creates at least 10 full-time jobs for individuals authorized to work in the U.S. become eligible for permanent U.S. residency. Investors’ families become eligible for permanent residency, as well. Qualifying commercial enterprises include publicly or privately owned sole proprietorships, partnerships, and other corporations. The capital investment threshold is lowered to $500,000 if the commercial enterprise is in a “targeted employment area,” defined as a rural area or an area that has experienced high unemployment (at least 150 percent of the national average rate).

In 1993, Congress introduced a pilot program that allowed investors to pool their investments into “regional centers.” Regional centers are for-profit intermediaries that connect investors to commercial enterprises in need of funding. If foreign investors send their money to a regional center, they are allowed to count jobs that are created both directly and indirectly by their investments toward the 10-job requirement. The Regional Center Pilot Program has been regularly reauthorized since its introduction and most recently was extended through Sept. 30, 2018.

Fraud Under the EB-5 Program

In remarks on the Senate floor on March 19, 2018, Senator Chuck Grassley of Iowa highlighted several facets of the EB-5 Program that make it vulnerable to fraud and abuse. He noted, for example, that commercial enterprises can spend EB-5 money before their business plans are approved by the government; that regional centers do not have to certify that they comply with U.S. securities laws; and that, because regional centers can use estimates or economic modeling to verify that “indirect” jobs will be created, there is no guarantee that qualified employees actually will be hired as a result of the foreign investment.

Regional centers are especially ripe for abuse because they are structured to allow their operators to earn commissions on investors’ money. In fact, the SEC issued an Investor Alert in 2013 warning prospective EB-5 investors about the prevalence of fraud among regional centers. In one recent example, federal investigators uncovered a multimillion-dollar EB-5 fraud scheme centering on a sham regional center in San Gabriel Valley, Calif. Operators of the sham center submitted fake development plans to federal officials in order to obtain visas for their foreign investors. The center collected nearly $50 million from over 100 foreign investors over the course of several years, and its operators used the money to purchase luxurious homes and cars for their own use.

According to the SEC’s 2013 Investor Alert, some red flags that indicate a regional center may be operating fraudulently include supposedly “unaffiliated” consultants, lawyers, or agencies, who nevertheless are paid by the center; the center’s refusal to put the terms of an initial securities offer in writing, or to explain an offering memorandum to investors’ satisfaction; and guaranteed or overly consistent returns on investments.

On top of the out-and-out fraud perpetrated by U.S. business owners under the program, states have gerrymandered targeted employment areas, which have a lower capital investment threshold, to accommodate real estate development in affluent areas. Gerrymandering prevents the program from serving the rural and underemployed areas it was created to help, further diminishing its efficacy. As The New York Times reported in 2011, state officials employed “selective use of census statistics” to classify an area in the diamond district of Manhattan, one of the wealthiest in the country, as a targeted employment area. This allowed developers to use EB-5 money to build the $750 million International Gem Tower near Fifth Avenue. As a result of actions like these, foreign investment is concentrated in areas that are already prosperous, and big-moneyed real estate developers reap disproportional benefits from the program.

Providing Information about EB-5 Fraud under the SEC Whistleblower Program

Under the SEC Whistleblower Program, individuals who provide original information about EB-5 fraud that leads to enforcement sanctions of at least $1 million are entitled to an award of between 10 percent and 30 percent of the money collected. In recent years, the SEC has announced several significant monetary awards for individuals who reported EB-5 investment fraud under its Whistleblower Program, including a $14.7 million award in 2013 for a tip that helped uncover $147 million in fraudulently obtained investor funds.

In that case, a Chicago businessman attracted foreign investors with a plan to build the “World’s First Zero Carbon Emission Platinum LEED certified” hotel and conference center. In reality, however, the businessman used false information, including that all the necessary building permits had been obtained and that several major hotel chains had signed on to the project, to secure the foreign money. The whistleblower’s tip came in to the SEC soon enough that the businessman had only misappropriated $2.5 million of the investors’ money before the scheme was stopped.

If whistleblowers like the one in Chicago have information concerning EB-5 fraud, they, too, can be rewarded for providing that information to the SEC.