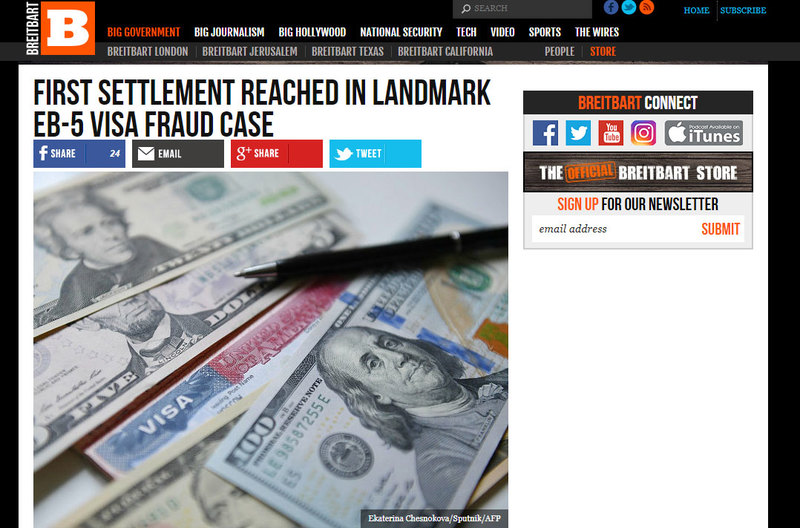 Five companies involved in Vermont’s Jay Peak ski and water park development reached a $225,000 settlement with the Securities and Exchange Commission (SEC) Wednesday as part of the ongoing EB-5 “golden visa” fraud case against the development’s owner, according to a report by Law 360.

The SEC accuses Jay Peak owner Ariel Quiros of embezzling tens of millions of dollars from foreign investors using the controversial EB-5 visa program, through which foreigners, usually Chinese, can obtain U.S. green cards if they invest $500,000 in certain American-based projects. Since 2008, it is alleged Quiros took more than $50 million dollars of the $350 million he raised from EB-5-seeking foreigners for his own personal expenses, in effect using the promise of U.S. permanent residency to run a massive “ponzi-type” investment fraud.

The SEC seized Jay Peak’s assets as they brought suit against Quiros in 2016, alleging he was using EB-5 investor funds to “(1) Finance his purchase of the Jay Peak resort; (2) back a personal line of credit to pay his income taxes; (3) purchase a luxury condominium; (4) pay taxes of a company he owns; and (5) buy an unrelated resort.”

Wednesday’s settlement involved five contractors who worked with Quiros on the water park at Jay Peak: Black River Design Architects PLC; DEW Construction Corp.; VHV Co.; FabricAir Inc.; and Ramaker and Associates Inc. According to Law360, the companies deny wrongdoing but agreed to settle the case for $45,000 each.

The much larger case against Quiros himself is ongoing but is reported to be close to a settlement that will exclude Quiros from ever participating the in EB-5 visa program again.

The Jay Peak case is just one of the high-profile alleged scams run using the EB-5 program, which detractors, like Senate Judiciary Committee Chairman Chuck Grassley (R-IA) and ranking Democrat Diane Feinstein (D-CA) have introduced legislation to eliminate. Feinstein, last year, went so far as to characterize the embattled program as “U.S. citizenship is for sale.”

In addition to the Jay Peak scandal, EB-5 fraud concerns have crept into the business dealings of the political elite of the United States including that of White House Adviser Jared Kushner’s old employer the Kushner Companies, former Virginia Governor and Hillary Clinton bundler Terry McAuliffe, and former Republican-appointed Alabama Senator Luther Strange.