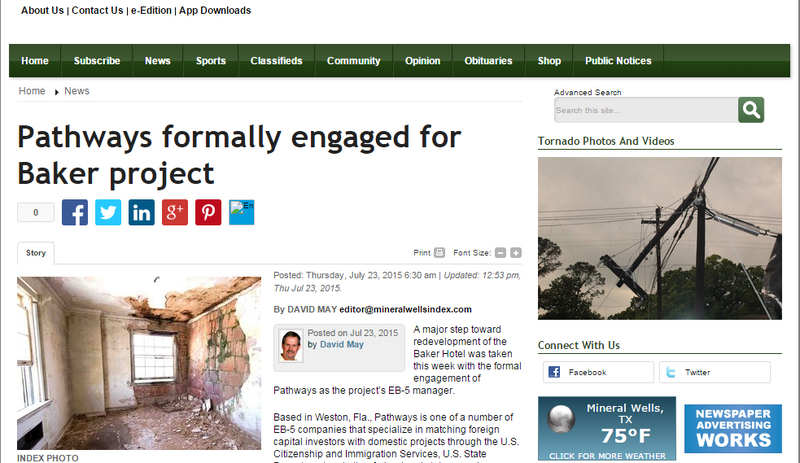 Left to gradually deteriorate over the past four decades, the Baker Hotel could within the next two years be the scene of a major renovation project if the complicated $60 million financing components can come together.

A major step toward redevelopment of the Baker Hotel was taken this week with the formal engagement of Pathways as the project’s EB-5 manager.

Based in Weston, Fla., Pathways is one of a number of EB-5 companies that specialize in matching foreign capital investors with domestic projects through the U.S. Citizenship and Immigration Services, U.S. State Department and other federal and state agencies.

“We have signed a contract with Pathways, and they are now going to work with economists and the USCIS,” said Chad Patton, managing project team leader along with Laird Fairchild, who have been working several years with local officials and groups to formulate the plans and financing for the proposed $60 million renovation project of the iconic 14-story hotel that has sat vacant and deteriorating for four decades.

Pathways is the second EB-5 company the Baker team has worked with, however the first company was never formally engaged. Patton called its agreement with Pathways a “major milestone” in the project, which now hopes to begin work in early 2017 and opening the hotel by 2020.

The EB-5, or foreign investment, component accounts for about half of the capital needed for the project with hopes of raising at or near $30 million. Participation in this project through EB-5 requires a minimum capital investment of $500,000.

Patton said one of the first things Pathways will do is file necessary documents with USCIS to elevate the project’s status and get it in line with other approved EB-5 projects. He said because of pending legislative changes it is important the filing is completed by the end of September.

“This validates the project and grandfathers us in,” said Patton. “It gets us in the hopper.”

Attempts to reach officials with Pathways for comment were not successful.

In March, the Baker team released the results of a proforma study compiled by Houston-based PKF Consulting USA on the project that showed in its first full year of operation the hotel could realize $2.1 million in net operating profit that could grow to $5 million in annual net profits in 10 years.

The study looked at a variety of local and regional economic factors, and compared the Baker Hotel, operating as a renovated 157-room destination resort and spa, to six other comparable Texas resorts.

Built in 1929, the Baker Hotel  was a destination hotel, health spa and resort, attracting film and TV stars for several decades lured by the healthy, curative mineral waters. The hotel closed in 1972, and was placed on the National Register of Historic Places in 1982.