When it comes to Queens investment, the only way is up 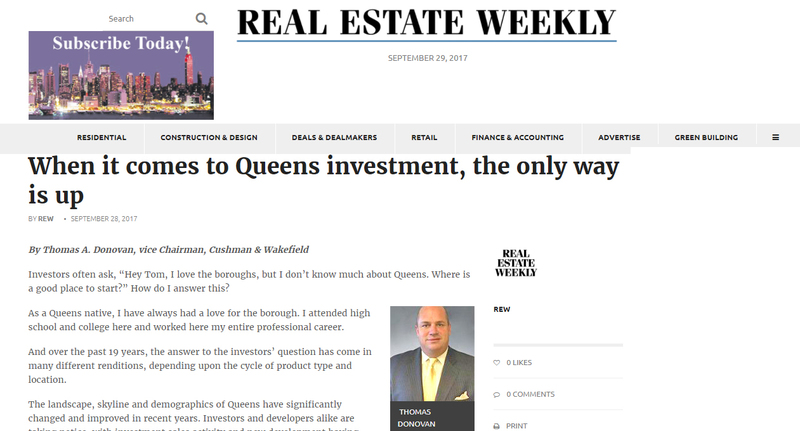 Investors often ask, “Hey Tom, I love the boroughs, but I don’t know much about Queens. Where is a good place to start?” How do I answer this?

As a Queens native, I have always had a love for the borough. I attended high school and college here and worked here my entire professional career.

And over the past 19 years, the answer to the investors’ question has come in many different renditions, depending upon the cycle of product type and location.

The landscape, skyline and demographics of Queens have significantly changed and improved in recent years. Investors and developers alike are taking notice, with investment sales activity and new development having reached new heights.

There are currently more than 20,000 new apartments planned or under construction within various phases of development. Of all the buildings demolished in New York City in 2016, Queens accounted for 35.4 percent of them, the highest percentage of all five boroughs, according to the NYC Rent Guidelines Board, and a total of 477 new residential building permits were issued last year.

Although there has been a dip in volume and turnover thus far in 2017, values have remained strong for such income-producing asset classes as retail and multifamily.

One of Queens’ most notable investment highlights is that it boasts the lowest residential vacancy rate — 2.69 percent — of any borough in New York City.

Coupled with a population exceeding 2.3 million people, multifamily apartment buildings have always been a safe gateway to real estate investment in Queens.

Population growth has also led to a greater need and demand for new housing stock.

The rezoning of approximately 175 blocks’ worth of industrial properties in Long Island City, Maspeth, Woodside and Sunnyside during 2005 and 2006 has helped to fulfill residential demand.

Subsequently, the diminishing industrial supply has caused industrial pricing to soar. There has been little to no new development or replenishment of the stock of industrial properties.

Jamaica has greatly benefited from the 368-block rezoning in 2007, along with the addition of the AirTrain.

Burlington Coat Factory is slated to occupy 70,000 s/f within a new retail development on Jamaica Avenue. Flushing has had large successes with population growth and the use of EB-5 benefits; its skyline has dramatically changed with substantial development over the past several years. New units being developed have also helped local retail, restaurants and services thrive borough-wide.

Investors have found the neighborhoods of Long Island City, Ridgewood, Sunnyside, Woodside and Elmhurst to stand as less expensive options to Williamsburg, Greenpoint and Bushwick, with tremendous growth potential.

Brooklyn has emerged as a top residential choice for new college graduates, and this has sent the value of its housing stock soaring.

Yet at the same time, there’s been a surge in the number of new residential units in the abutting Queens neighborhoods. These latter properties are being marketed as a housing alternative that’s both close by and also far less expensive.

There are several substantial development projects in the pipeline throughout the borough of Queens.

Court Square City View Tower in Long Island City will be the tallest, at 78 stories and more than 900 feet, with 702 apartments. It will feature unparalleled skyline views and luxury amenities. Gotham Center, also in Long Island City, is the largest overall project currently in the works, spanning 2.8 million square feet. It will include three residential buildings with a total of 1,900 units – along with three office buildings.

Construction is underway on a four-building, 1.2 million-square-foot, mixed-use development site dubbed Tangram, in downtown Flushing. An 11-story mixed-use residential building has been proposed for 124-22 Queens Boulevard in Kew Gardens. QB38 Tower, now under construction in Sunnyside, is a nine-story building featuring 125,000 square feet of community facility space over ground retail.

Earlier this year, NYC Ferry transportation service expanded to serve the neighborhoods of Astoria and Rockaway. Areas that house rail stations have always drawn a strong retail presence, combined with residential development. So, where should one invest in Queens?

Today, my answer would be to identify the product type you would like to invest in, allocate the appropriate budget, and physically explore areas of interest.

Because, when it comes down to it — remarkable as it may sound — there are virtually no bad places in which to invest within the borough of Queens.