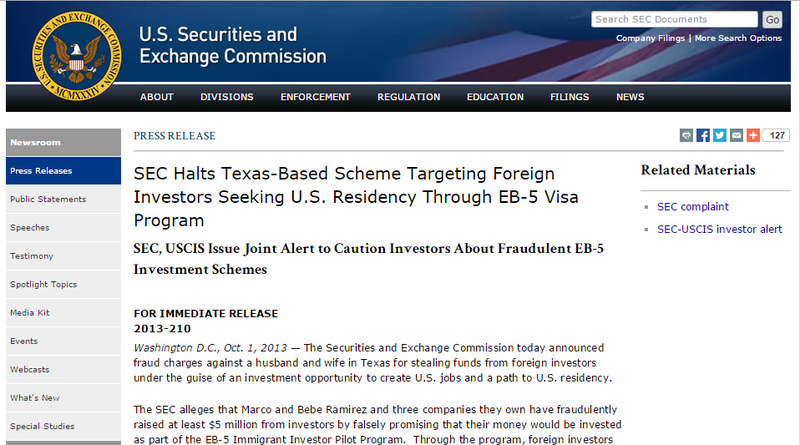 The Securities and Exchange Commission today announced fraud charges against a husband and wife in Texas for stealing funds from foreign investors under the guise of an investment opportunity to create U.S. jobs and a path to U.S. residency.

The SEC alleges that Marco and Bebe Ramirez and three companies they own have fraudulently raised at least $5 million from investors by falsely promising that their money would be invested as part of the EB-5 Immigrant Investor Pilot Program.  Through the program, foreign investors can earn conditional visas and eventually green cards by making investments in U.S. economic development projects that will create or preserve a minimum number of jobs for U.S. workers.  Instead of investing the money as promised, the Ramirezes routinely diverted investor funds to other undisclosed businesses and for their personal use. In at least one instance, they used new investor funds to make Ponzi-like payments to an existing investor.

According to the SEC’s complaint unsealed today in U.S. District Court for the Southern District of Texas, the Ramirezes initially targeted investors in Mexico, but more recently have solicited investors in Egypt and Nigeria.  The court has granted the SEC’s request to freeze the assets and accounts of the Ramirezes and their three companies: USA Now LLC, USA Now Energy Capital Group LP, and Now Co. Loan Services. This effectively halts their ability to raise further money from investors or spend any remaining funds in the scheme.

“Through their investment scheme, the Ramirezes abused a program intended to attract foreign capital to create U.S. jobs,” said David R. Woodcock, Director of the SEC’s Fort Worth Regional Office.  “The Ramirezes misappropriated investor funds for their own purposes without any regard for the harm they caused investors who were seeking an avenue to U.S. residency.”

The SEC and U.S. Citizenship and Immigration Services (USCIS) today issued a joint investor alert that provides additional information about the EB-5 program and cautions investors about fraudulent EB-5 schemes.  USCIS offered substantial assistance in the SEC’s investigation of the Ramirezes.  The EB-5 program is administered by USCIS and enables foreign investors to make their investments either directly in a business or through EB-5 “regional centers” that are private entities organized to promote economic development in specific geographic areas and industries.

According to the SEC’ s complaint, beginning in 2010, the Ramirezes sought approval from USCIS to register USA Now as an EB-5 regional center that would accept and direct investments from foreign investors into investment opportunities that would purportedly satisfy the EB-5 visa requirements.  But even before USCIS decided, the Ramirezes and other USA Now employees already had started soliciting investors with false promises about how their money would be invested.

The SEC alleges that the Ramirezes told investors that USA Now would hold their investments in escrow until they received USCIS approval.  And once the funds were released from escrow, they would be used for specific business purposes.  However, the Ramriezes failed to hold the funds in escrow as required, and instead routinely diverted the funds for other uses not described in offering materials, often on the same day the funds were received.  Among their misappropriations, the Ramirezes appear to have opened a Cajun-themed restaurant with investor funds and settled an unrelated lawsuit.  Meanwhile, none of the at least 10 investors identified by the SEC as victims of the scheme have received visas from USCIS, and none of their funds seem to remain in escrow.

“Even though investors provided the Ramirezes with at least $5 million, none of them have ever received conditional visas let alone green cards,” said David Peavler, Associate Director of the SEC’s Fort Worth Regional Office.  “Instead, the Ramirezes opened a restaurant and purchased other assets for themselves and their employees.”

The SEC’s complaint alleges that the Ramirezes and their companies violated and aided and abetted violations of the antifraud provisions of the Securities Act of 1933 and the Securities Exchange Act of 1934.  The complaint seeks various relief including preliminary and permanent injunctions, disgorgement of ill-gotten gains with prejudgment interest, and financial penalties.

The SEC’s investigation has been conducted by Timothy Evans, Kimberly Cain, Ty Martinez, and Jonathan Scott of the Fort Worth Regional Office.  The SEC’s litigation will be led by Mr. Evans and David Reece. The SEC appreciates the assistance of the Federal Bureau of Investigation and U.S. Attorney’s Office for the Southern District of Texas.