Atty Tried To Pass Off EB-5 Investor Cash As Own: Lender 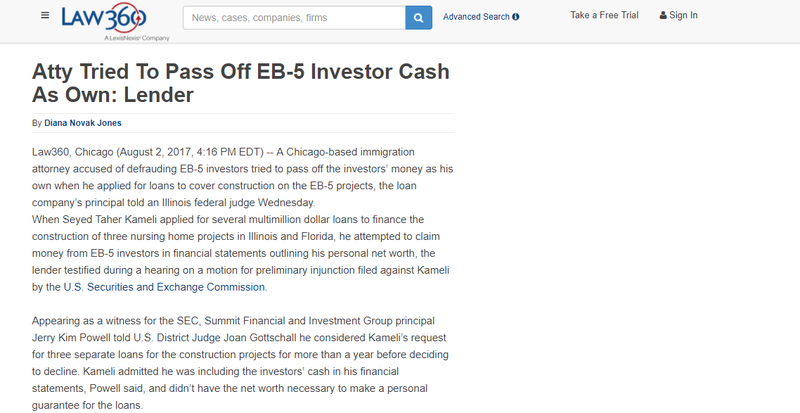 A Chicago-based immigration attorney accused of defrauding EB-5 investors tried to pass off the investors’ money as his own when he applied for loans to cover construction on the EB-5 projects, the loan company’s principal told an Illinois federal judge Wednesday.

When Seyed Taher Kameli applied for several multimillion dollar loans to finance the construction of three nursing home projects in Illinois and Florida, he attempted to claim money from EB-5 investors in financial statements outlining his personal net worth, the lender testified during a hearing on a motion for preliminary injunction filed against Kameli by the U.S. Securities and Exchange Commission.

Appearing as a witness for the SEC, Summit Financial and Investment Group principal Jerry Kim Powell told U.S. District Judge Joan Gottschall he considered Kameli’s request for three separate loans for the construction projects for more than a year before deciding to decline. Kameli admitted he was including the investors’ cash in his financial statements, Powell said, and didn’t have the net worth necessary to make a personal guarantee for the loans.

Kameli was “very candid” when asked if a financial statement he submitted to Summit claimed he had a net worth of nearly $17 million included investors’ cash, Powell said.

He said it did, and that his accountant refused to sign off on it for that reason, Powell added. Kameli responded honestly again when Powell told him that money couldn’t count toward his net worth, which Summit required to be at least equal to the amount he intended to borrow, Powell said.

The SEC filed a lawsuit against Kameli in June, accusing him of misusing a portion of nearly $89 million he collected between 2009 and 2016 from more than 200 Chinese and Iranian investors hopeful their cash would earn them permanent residency in the United States.

The U.S. Citizenship and Immigration Services’ EB-5 program grants green cards to foreigners who invest at least $500,000 in a project that creates American jobs. Kameli used the program to solicit investors for three nursing home projects, but shuffled money between the projects without notifying the investors and spent it in business deals and trades that benefited him and his family, the SEC said.

In the meantime, the projects have stalled, leaving the investors’ cash in question and their applications for residency hanging by a thread, the SEC said.

The SEC is trying to convince Judge Gottschall to bar Kameli from selling or offering EB-5 investments, to freeze his and his companies’ assets and put them in a receivership.

In addition to his concerns about Kameli’s net worth, Powell told the judge Wednesday he didn’t trust the budget numbers Kameli and his brother provided for the projects they claimed they needed funding for.

“The numbers kept changing,” Powell said, adding that Kameli’s decision to reimburse some of the EB-5 investors added to his concern about the stability of the projects.

Kameli, who is defending himself against the SEC’s claims, has denied any wrongdoing.

On cross examination Wednesday, Kameli questioned Powell about whether he ever actually intended to make the loans.

Kameli asked Powell to total up the fees he and his loan company earned while considering funding Kameli’s projects, money Powell earned despite his decision not to lend Kameli the $40 million spread out over three loans the two discussed.

Powell acknowledged Summit earned about $90,000 in fees after he sent Kameli’s companies a notice of commitment.

And Summit declined to make the loans despite receiving a report from an independent third party that reviewed the projects’ budgets and said they were adequate, Kameli noted.

Did Kameli ever indicate to Summit that he had a net worth even close to $40 million? Kameli asked.

The SEC is represented in-house by Eric M. Phillips, Alyssa A. Qualls, Tracy W. Lo and BeLinda I. Mathie.