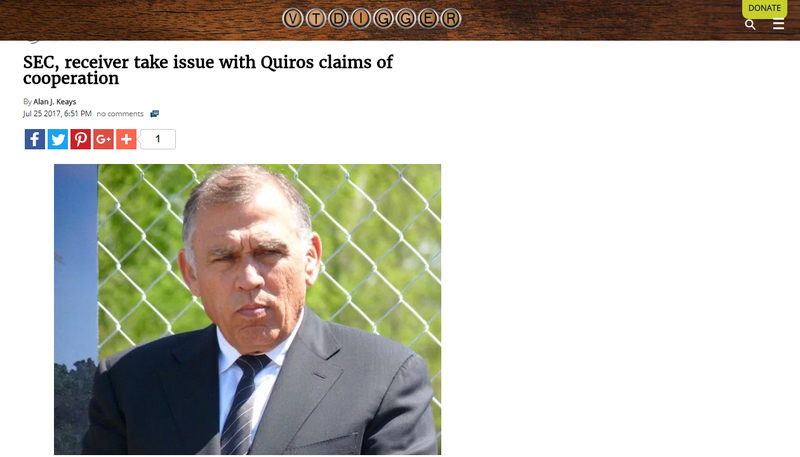 Ariel Quiros at a groundbreaking for a project in northern Vermont in May 2015.

A court-appointed receiver says Jay Peak owner Ariel Quiros is not cooperating with federal authorities, despite claims by his attorney.

Receiver Michael Goldberg, in a recent filing, took issue with statements by Quiros’ attorney that her client has assisted Goldberg and the U.S. Securities and Exchange Commission in helping build cases against others connected to fraud allegations.

Goldberg also challenged an assertion in court records by Quiros’ attorney about his “ongoing cooperation with the SEC and the receiver.”

“Both statements are false,” Goldberg wrote. “Since the outset of this case, Quiros has not assisted and is not currently assisting the receiver or the Receivership Entities in building any case against third parties.”

“Furthermore, while Quiros recently turned over three properties to the Receivership under an agreed upon court order that allowed him to receive attorneys fees from frozen funds, Quiros has not otherwise cooperated with the Receiver or Receivership Entities. I know of no basis for Quiros to make either of those statements.”

While Quiros continues to face an SEC suit accusing him of investor fraud, a separate action brought against him by the receiver had been stayed for the past several months. Goldberg wrote in his recent filing that he anticipates asking the court to lift that stay as he looks to move that case against Quiros forward.

Melissa Visconti, Quiros’ attorney, could not immediately be reached Tuesday for comment, and an automatic email reply stated she was out of the office. The SEC filed its case against her client in April 2016. Visconti has represented Quiros for about five months.

Quiros fired his earlier legal team in March, citing, among other things, concern over how much they were charging him, according to court filings.

His past legal team consistently battled with the SEC in court filings, taking an adversarial approach in dealing with the SEC.

Visconti, speaking in April, said she intended to pursue a much different strategy, pledging to cooperate with the SEC and receiver.

The firm where she works, Miami-based Damian & Valori LLP, specializes in cases involving the SEC and receiverships.

Visconti also said at that time that her client’s past team had taken an approach that had “not served Mr. Quiros well so far.” 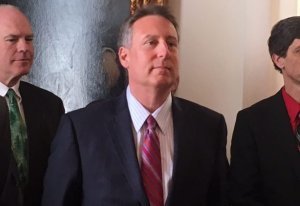 Goldberg, reached while traveling Tuesday, said: “We have reached certain agreements when doing so has been in his interest, but I really don’t consider that to be cooperation. That being said, the communication has been much better since he retained new counsel.”

The SEC lawsuit filed in 2016 contends that Quiros, along with Bill Stenger, Jay Peak’s former president, ran a “Ponzi-like” scheme to defraud investors taking part in the EB-5 visa program. The two developers had been raising money for a series of projects at Jay Peak as well as other projects at Burke ski area and in the city of Newport.

Stenger and Quiros, according to filings, misused $200 million out of more than $350 million raised from the investors. Also, the lawsuit accuses Quiros of “looting” more than $50 million to pay personal expenses, from taxes to a luxury New York City hotel.

Visconti, Quiros’ attorney, and SEC lawyers have been battling in dueling court filings over what defenses the Jay Peak owner he can raise to contest the investor fraud allegations he faces.

In a filing submitted on his behalf, Quiros stated he is entitled to “contribution from others and/or a set-off” against claims in the SEC lawsuit that others, in whole or in part, caused the alleged losses, including “financial services providers, accountants, and professionals,” and those “alleged losses have been repaid in whole or in part by Defendant Quiros and others.”

Quiros’ proposed defense also claims that he relied “in good faith” on information and opinions of professionals, including “attorneys, accountants, and financial services providers.”

Earlier this year, Goldberg reached a nearly $150 million settlement with Raymond James & Associates Inc., a financial institution that Quiros had used. That settlement provides money to pay contractors and vendors owed for services they provided, cover some of the losses by investors, as well as complete projects their money was supposed to pay for.

In the filing listing his defenses, Quiros does not specifically name Raymond James, or any of the other third parties.

Levenson, in a response, said Quiros should have to be more specific about the third parties he is referring to, or not to be allowed to raise them as part of his defense.

Visconti, in her most recent filing, wrote that the receiver and SEC should know who her client is referring to.

“While Mr. Quiros is not prepared to name all third parties at this time, he continues to investigate potential third-party actions and to assist the Receiver in building a case against third parties,” Visconti wrote.

“And the settlement by Raymond James & Associates strongly suggests, if not evidences, that they are a liable third party upon whose advice Mr. Quiros relied to the detriment of the Defendants and himself. Plaintiff, therefore, cannot claim to have insufficient notice of the misconduct of third parties … “

She also briefly touched on talks with regard to a possible settlement for her client.

“Indeed, Mr. Quiros has already turned over to the receivership estate assets and cash valued at more than $10 million, and he is in negotiations with the SEC and the Receiver to turn over additional assets worth tens of millions of dollars should a global settlement be reached,” she wrote.

The dispute over Quiros’ level of cooperation arises as a filing was recently submitted to the court about the scheduling of a court-ordered mediation session. Judge Darrin P. Gayles, in setting a schedule for the case that included a September 2018 trial, also ordered that a mediation session take place before that date.

The SEC and Quiros’ attorney have set that mediation session for Dec. 19. Howard Tescher of the Tescher Mediation Group of Fort Lauderdale, Florida, will serve as mediator.