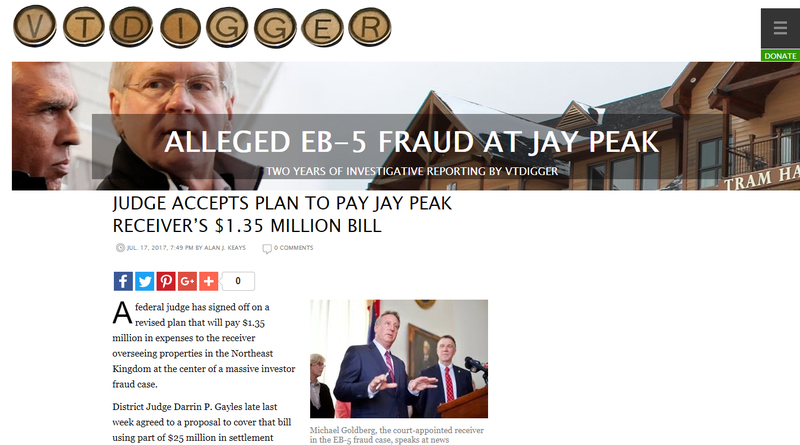 A federal judge has signed off on a revised plan that will pay $1.35 million in expenses to the receiver overseeing properties in the Northeast Kingdom at the center of a massive investor fraud case.

District Judge Darrin P. Gayles late last week agreed to a proposal to cover that bill using part of $25 million in settlement proceeds that had initially all been set aside for attorneys representing investors in litigation connected to the alleged “Ponzi-like” scheme.

Thirteen law firms had originally planned to divide that $25 million among themselves. However, after Gayles raised concerns that the receiver’s bill wasn’t covered as well, a new plan was submitted.

Michael Goldberg, the court-appointed receiver, could not be reached Monday for comment.

In total, the receivership has now been awarded $3.3 million to cover its expenses since the Securities and Exchange Commission and the state leveled investor fraud allegations against developers Ariel Quiros and Bill Stenger in April 2016.

Quiros, Jay Peak’s owner, and Stenger, the ski resort’s former CEO and president, are accused of misusing $200 million of more than $350 million raised from immigrant investors through the federal EB-5 visa program. The money was to fund massive improvements at Jay Peak as well as other projects in Vermont’s Northeast Kingdom. Some of the projects weren’t completed; others, never begun.

The $25 million to be divided up comes from a larger settlement the receiver negotiated with Raymond James & Associates Inc., a financial services firm Quiros had used.

The bulk of that nearly $150 million settlement goes to pay contractors and businesses owed money for their work on projects; to help finish developments that weren’t fully built, and to compensate some of the investors who put money into projects that didn’t even get off the ground.

Gayles approved the overall settlement with Raymond James late last month, but held off on the initial plan for the distribution of the $25 million from the attorneys’ fund.

That fund was established to compensate those attorneys for dropping litigation they had brought on behalf of investors against Raymond James. The Raymond James settlement included a bar order, which protects the financial services firm from such lawsuits.

The $25 million attorneys’ fund, according to court records, also “obviates” the need for investors to compensate their lawyers on their own.

Raymond James, as part of the settlement, admits no wrongdoing.

Goldberg alleged in a lawsuit that Raymond James “aided and abetted” Quiros in a “Ponzi-like” scheme in which he misused $200 million in investor funds, including “looting” more than $50 million.