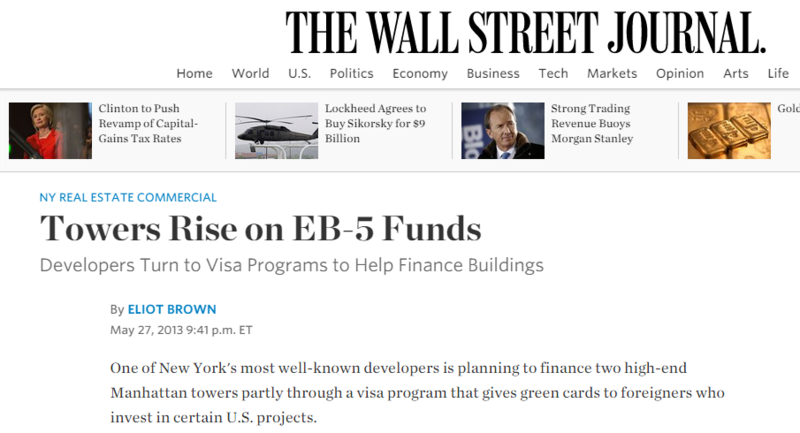 One of New York's most well-known developers is planning to finance two high-end Manhattan towers partly through a visa program that gives green cards to foreigners who invest in certain U.S. projects. 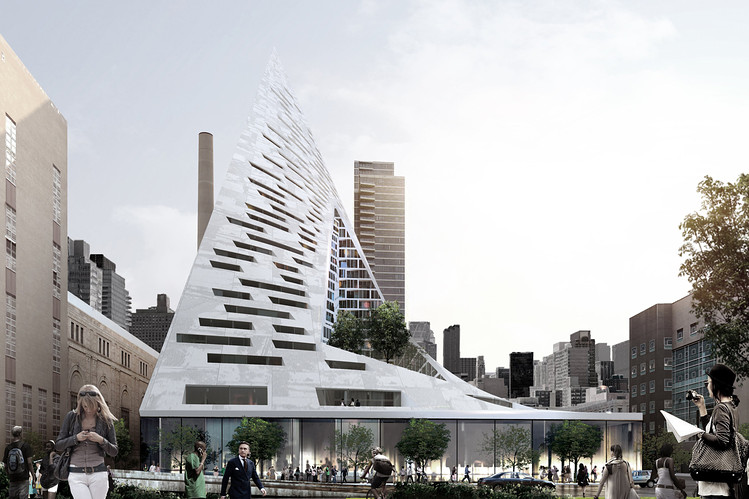 ENLARGE
A new apartment building designed by architect Bjarke Ingels may be financed by the EB-5 Visa program.

The Durst Organization aims to raise about $260 million through the "EB-5" visa program, which has become increasingly popular in recent years. Durst, like many other developers, has turned to it because of its difficulty in finding other forms of construction financing.

Certain types of loans that developers formerly relied on have become "very expensive and very hard to do in rental property," says Gary Rosenberg, an attorney for Durst.

One of the projects would be a 41-story glass tower at Sixth Avenue and 31st Street with a mix of apartments, office space and retail. Plans for the other, 625 W. 57th St., call for a pyramid-shaped apartment building designed by avant-garde architect Bjarke Ingels Group.

The EB-5 program—so named because it is the fifth category of employment-related immigration visas—allows foreign citizens to secure green cards when they invest at least $500,000 per family in projects that create at least 10 jobs per investor.

Durst's use of the once-obscure program shows how it has vaulted into the mainstream. Applications by foreign investors have jumped to 6,041 in fiscal year 2012 from 486 in 2006, according to U.S. Citizenship and Immigration Services, which administers the program.

Local projects that have used the program include the $4.9 billion Atlantic Yards apartment and arena project in Brooklyn developed by Forest City Ratner Cos. and Extell Development Co.'s 34-story International Gem Tower on West 47th Street.

In the past, "you had to explain it to people—people didn't believe that the program was around," says George Olsen, managing principal of the New York City Regional Center, a company that found investors for the Atlantic Yards project. "Now it's a lot more popular and people have heard of it."

Of course, the program has risks, particularly for investors. Should a project stall or otherwise fail to create the needed jobs, investors lose their money and a shot at a green card.

Citizenship and Immigration Services has stepped up scrutiny on projects, though many in the industry have called for legislative reforms. Critics say foreign investors can have difficulty screening the projects' worth.

The EB-5 program was started in the 1990s, but it only took off during the downturn, when banks and other lenders pulled back on making loans to construction projects. Developers searching for alternatives found that EB-5 investors typically make loans at reasonable interest rates—because their focus is on immigrating, not on making a financial return—and were still willing to fund projects during the downturn.

With the growing demand, it has morphed from being used largely by developers of small and mid-size hotel and mixed-use projects to builders of prominent towers. Durst, for example, is known for building such skyscrapers as the Bank of America tower at Bryant Park.

Mr. Rosenberg says traditional banks are making smaller loans than they used to for development projects. Also, interest rates are too high on a type of supplementary financing known as mezzanine debt that used to be more widely available, he says.

Mr. Rosenberg says Durst is hoping to raise $80 million in EB-5 financing for the tower at Sixth Avenue and 31st Street, known as 855 Sixth Ave., which represents about 19% of its total cost. Investors have made commitments for about half of that $80 million, he says.

Durst is working on hiring a construction contractor for the building, slated to have 299 luxury apartments and 76 reserved for low-income families. A brochure from the US Immigration Fund says Durst projects rents will be as high as $8,300 a month for a two-bedroom.

Durst has begun excavation work on the other building, on 57th Street and the West Side Highway, and plans to start raising money soon. The developer hopes to raise $180 million in EB-5 financing for that project.