This Week In Securities Litigation 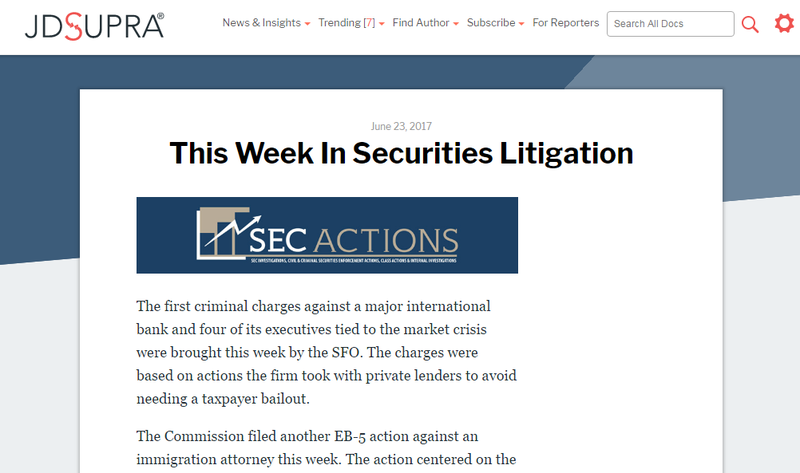 The first criminal charges against a major international bank and four of its executives tied to the market crisis were brought this week by the SFO. The charges were based on actions the firm took with private lenders to avoid needing a taxpayer bailout.

The Commission filed another EB-5 action against an immigration attorney this week. The action centered on the misuse of investor funds. Another action alleged a failure to supervise at a broker-dealer tied to the securities lending desk and not determining if pre-release ADRs were supported by the required underlying securities. A third case centered on a market manipulation to push up the sale price of shares sold by the firm’s controlling shareholder, the profits of which were then secretly loaned to the company. Finally, the Commission brought a financial fraud action centered on the valuation of an acquisition where the deal maker admitted that neither the firm purchased nor the shares used as currency were worth the assigned valuations.

EB-5 Offering fraud: SEC v. Kameli, Civil Action No. 17-cv-04686 (N.D. Ill. Filed June 22, 2017) is an action which names as defendants Seyed Taher Kameli, an immigration attorney, and his two firms, Chicagoland Foreign Investment Group, LLC and American Enterprise Pioneers, Inc. Over a period of five years beginning in 2009 defendants raised about $88.6 million from at least 226 foreign investors who sought a path to citizenship through the EB-5 immigration program. Rather than use the money to fund the construction projects for which the funds were raised, Mr. Kameli diverted significant portions of the investor money to other projects and to his personal benefit. The complaint alleges violations of each subsection of Securities Act Section 17(a) and Exchange Act Sections 10(b) and 20(a). The Commission is seeking a freeze order and the appointment of a receiver. The case is in litigation. See Lit. Rel. No. 23866 (June 22, 2017).

Failure to supervise: In the Matter of Anthony Portelli, Adm. Proc. File No. 3-18042 (June 22, 2017). Mr. Portelli was a managing director of ITG, Inc., a registered broker dealer. From 2001 through 2014 the firm’s securities lending desk engaged in improper practices involving the pre-release of ADRs. Specifically, pre-release ADRs were used in lending without ascertaining if the requisite shares had been deposited. Respondent, as Head of Operations, was directly responsible for supervising the securities lending desk. Reasonable steps were not taken to supervise the desk with a view to preventing violations of Securities Act Section 17(a)(3). The firm previously settled charges based on these facts. To resolve the action Mr. Portelli consented to the entry of a censure. In addition, he is barred from acting in a supervisory capacity with a broker dealer for 18 months. After that time he may apply to act in such a capacity with the appropriate regulator. He will also pay a penalty of $100,000.

Manipulation: SEC v. Farinella, Civil Action No. 2:17-cv-04538 (D.N.J. Filed June 21, 2017) is an action which names as defendants: James Farinella, a director and officer of defendant Integrated Capital Partners, Inc.; Anthony Amado, a principal of defendant Equities Awareness Group, LLC; and Carlo Palomino who worked for Equities Awareness. In 2012 Mr. Farinella, with the assistance of the other defendants, manipulated the share price of Integrated Capital which he controlled, reaping about $1 million in profits. The complaint alleges violations of Securities Act Sections 17(a)(1) and (3) and Exchange Act Sections 9(a)(1) and (2) and 10(b). The case is pending. A parallel criminal case was filed by the U.S. Attorney’s Office for the District of New Jersey. See Lit. Rel. No. 23864 (June 21, 2017).

Misappropriation: SEC v. Mac Rust, Civil Action No. 16-cv-03573 (S.D.N.Y.) is a previously filed action which named as defendants attorneys Christopher Brenner and Jay Mac Rust. The complaint alleged that the attorney defendants were part of a solicitation of investors and that they were supposed to hold the funds raised in an attorney escrow account for safety. In fact the funds were used to make risky investments. In some instances the investor money was misappropriated. Mr. Brenner settled with the Commission and the Court entered judgment. The judgment permanently enjoins Mr. Brenner from future violations of Exchange Act Section 10(b). Mr. Brenner also consented to the entry of an SEC order permanently barring him from appearing or practicing before the Commission as an attorney. The underlying facts were uncovered during a broker-dealer inspection. See Lit. Rel. No. 23865 (June 21, 2017).

Manipulation: SEC v. Arista Power, Inc., Civil Action No. 17-cv-04598 (S.D.N.Y. Filed June 19, 2017) is an action which names as defendants: the firm; William Schmitz, its CEO; Michael Hughes, counsel; Peter Kolokouris, a consultant who has previously been charged with fraud by the Commission; and a number of Kolokouris family members. In 2012 when the firm needed capital about $1 million was raised through the private sales of company stock owned by the Kolokouris family. Messrs. Schmitz and Hughes facilitated the sales which were then supposedly loaned back to the company by an independent third part who was in fact controlled by Mr. Kolkouris. To effectuate the stock sales the share price was manipulated, making it appear that the third party buyers acquired the shares at a discount. Filings made with the Commission claimed that the funds received by the company came from a line of credit. Finally, members of the Kolokouris family are alleged to have violated Regulation M while engaging in a distribution. The complaint alleges violations of each subsection of Securities Act Section 17(a) and Exchange Act Sections 9(a)(1) and (2), 10(b) and Rule 102 of Regulation M. Mr. Schmitz settled with the Commission, agreeing to the entry of a three year officer and director bar and a three year penny stock bar along with a penalty of $80,000. See Lit. Rel. No. 23863 (June 20, 2017).

Financial fraud – valuation: SEC v. CannaVEST Corp., Civil Action No. 2:17-cv-01681 (D. Nev. Filed June 15, 2017). CanaVEST was a shell company. Defendant Michael Mona, Jr. had been the CEO of the firm since November 2012. In December 2012 CannaVEST entered into an agreement to purchase all the shares of PhytoSphere Systems, LLC from Medical Marijuana, Inc. or MJNA where Mr. Mona had been a consultant. At the time of the transaction CannaVEST had no operations, no revenues and $431 in assets. The deal would give it certain contracts for hemp and hemp oil. Mr. Mona negotiated the deal. The purchase price was $35 million in cash and/or CannaVEST shares. Under the terms of the deal CannaVEST shares would be valued in a range with a low of $4.50 and a maximum of $6.00 per share. At the time of the transaction there was no or little trading in CannaVEST shares on the OTC market. Ultimately CannaVEST paid 5,825,000 restricted shares and $950,000 in borrowed cash to acquire PhytoSphere in 2013. In 2013 the firm made quarterly filings with the SEC listing its assets at $36.6 million. Subsequently the firm was required to obtain two valuations of the acquisition, each of which concluded the firm was worth about $8 million. The quarterly financial statements were restated. Post deal Mr. Mona admitted that neither the subsidiary nor the shares used to purchase it were worth $35 million. The complaint alleges violations of Exchange Act Sections 10(b), 13(a), 13(b)(2)(A), 13(b)(2)(B), 13(b)(5) and SOX Section 304. The action is in litigation.

Commodities fraud: U.S. v. Wright (S.D.N.Y.) names as a defendant Michael Wright, the founder of an investment company that traded commodities. Mr. Wright obtained over $400,000 from investors beginning in 2011 that was supposed to be invested in commodities. Portions of the money were misappropriated while others were lost trading. Mr. Wright is alleged to have misrepresented the performance of the fund to investors and made Ponzi like payments. He has been charged with one count of commodity fraud and one count of wire fraud. The case is pending.

AML: The Securities and Futures Commission suspended Wu Biwei, former responsible officer and managing director of iSTAR International Futures Co. Ltd, for six months. The action was taken following a determination that Mr. Wu had failed to properly ensure that third party fund transfers were consistent with the customers’ known legitimate activities and maintain the appropriate records. He also failed to implement policies and procedures to properly safeguard against the risks of money laundering and terrorist financing associated with third party fund transfers.

Market crisis: The SFO brought criminal charges against Barclays Plc and four of its then senior officers based on two loans obtained in 2008 from Qatar Holding LLC and Challenger Universal Ltd., an investment vehicle of a former Qatari prime minister. Named as defendants along with the bank are: John Variey, former CEO; Roger Jenkins, former Executive Chairman of Investment Banking and Investment Management in the Middle East; Thomas Kalaris, former Chief Executive of Barclays Wealth and Investment Management; and Richard Boath, former European Head of Financial Institutions Group. Two counts of conspiracy and one count of unlawful financial assistance were filed.

The charges are based on two loans. The first was obtained by the bank in June 2008 for £4.5 billion. The second was obtained in October 2008 in the amount of £75 bn. The SFO alleges that the loans involved undisclosed payments made to the lenders for their participation. Each loan was made in conjunction with an advisory services agreement under which the bank paid a total of £322 million to the lenders. The advisory agreement accompanying the June loan was disclosed but the payments were not. The second advisory agreement was not disclosed at the time of the transaction.

An additional charge centers on a £2.4 billion loan made by the bank to Qatar in November 2008. Under Section 151 of the Companies Act 1985, which the SFO alleges was breached, companies are not permitted to lend money for the purchase of their shares. The SFO alleges that the loan was extended so the bank’s lenders could purchase Barclay shares to improve its financial condition.

By obtaining the loans Barclays avoided being nationalized with taxpayer funds. At the time of the transactions Lloyds Banking Group and Royal Bank of Scotland were forced to rely on taxpayer bailouts. Indeed, about one month before the October loan, Lehman Brothers collapsed. Initial court appearances are scheduled for early next month.