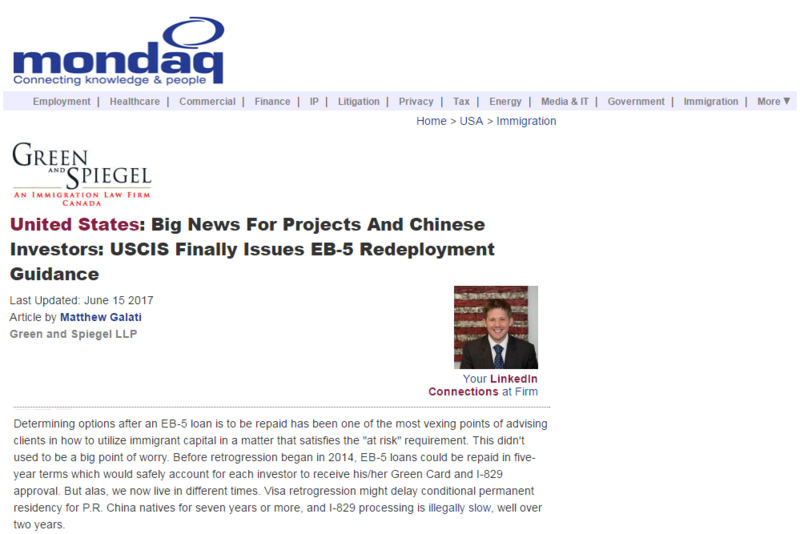 Determining options after an EB-5 loan is to be repaid has been one of the most vexing points of advising clients in how to utilize immigrant capital in a matter that satisfies the "at risk" requirement. This didn't used to be a big point of worry. Before retrogression began in 2014, EB-5 loans could be repaid in five-year terms which would safely account for each investor to receive his/her Green Card and I-829 approval. But alas, we now live in different times. Visa retrogression might delay conditional permanent residency for P.R. China natives for seven years or more, and I-829 processing is illegally slow, well over two years.

Since the 1998 precedent decisions we have known that EB-5 capital investments must remain at risk to qualify; they cannot sit in an NCE's bank account and do nothing. In 2015, facing the specter of severe retrogression, USCIS published a draft memorandum giving guidance on capital redeployment.

About a year later, I wrote an article for EB-5 Investors Magazine discussing the redeployment topic and lamenting that the draft memorandum was not yet published. It probably never will be.

However, on June 14, we received some new, important guidance on point.

In a rather vague email, USCIS sent notice to stakeholders that it updated its Policy Manual and is seeking comment. Frustratingly, the specific updates were not made clear. But here are three takeaways that investors, agents, and project principals need to know based on what close readers can glean from the updated version.

The Policy Manual gives examples that the funds may be redeployed by the NCE in a "commercially reasonable period of time" to be used in a manner similar to the initial contemplated EB-5 investment, or even "into certain new issue municipal bonds, such as for infrastructure spending, as long as investments into such bonds are within the scope of the new commercial enterprise." These two examples of course raise some additional questions as to the specifics.

However, for now we can applaud an important new and favorable development, as well as a big win for localities that may want to leverage EB-5 capital for infrastructure spending.

An investor may still remove conditions if his/her associated Regional Center's designation is terminated. USCIS explains that "with respect to the impact of regional center termination, an immigrant investor's conditional permanent resident status, if already obtained, is not automatically terminated if he or she has invested in a new commercial enterprise associated with a regional center that USCIS terminates. The conditional permanent resident investor will continue to have the opportunity to demonstrate compliance with EB-5 program requirements, including through reliance on indirect job creation."

This is an immensely positive development for investors who received their initial Green Cards and but had the misfortune of investing in an underperforming (or worse) Regional Center.

However, as we argued in our response to the draft regulations, this does not go far enough. Investors whose investments do not qualify after filing the I-526, through no fault of their own, should be able to preserve their priority dates. Hopefully the final regulations will implement our suggestion.

Although effective immediately, USCIS is offering a 14-day comment period on the Policy Manual changes. Stakeholders should, at minimum, urge USCIS to start making clear its changes through memoranda as was done in the past rather than send readers looking for elusive changes to the manual's text. On the substance of the matter, USCIS should also address the time period for sustainment of direct jobs and of operations jobs in economic plans which, in this period of retrogression, remain somewhat unclear.