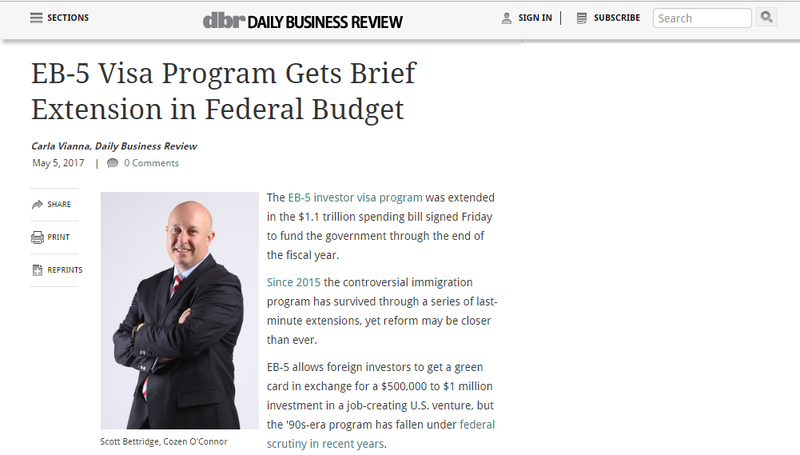 The EB-5 investor visa program was extended in the $1.1 trillion spending bill signed Friday to fund the government through the end of the fiscal year.

Since 2015 the controversial immigration program has survived through a series of last-minute extensions, yet reform may be closer than ever.

EB-5 allows foreign investors to get a green card in exchange for a $500,000 to $1 million investment in a job-creating U.S. venture, but the '90s-era program has fallen under federal scrutiny in recent years.

"We're back in the same boat where we believe that certainly before Sept. 30 legislative action may be taken through Congress to amend and reauthorize the EB-5 program," said Scott Bettridge, co-chair of Cozen O'Connor's immigration practice. U.S. Citizenship and Immigration Services "through the Department of Homeland Security may also do that on their own through regulation."

The Miami lawyer said legislative change is more likely, and the sentiment in Washington points to Congress making a move in late August.

Key issues include the minimum investment, which is now $500,000 for developments in targeted unemployment areas, or TEA. The investment needs to be $1 million everywhere else.

The DHS under President Barack Obama proposed to raise the minimum threshold to $1.35 million in a TEA and $1.8 million in other areas.

"That would almost end the program," said Arnstein & Lehr partner Ronald Fieldstone, who said the department's proposal was cast as a negotiation ploy.

For the first time, he said clear lines have been drawn between the law's backers and opponents. Some industry watchers believe change may be as close as the next few months.

On one end, the program faces opponents like U.S. Sen. Chuck Grassley, R-Iowa, who has proposed eliminating the visa altogether. He has argued wealthy communities like Manhattan have been inaccurately designated as high unemployment areas, reaping the benefits of foreign investment that should've gone elsewhere.

"The EB-5 program has been rife with fraud and national security weaknesses," he said in February. "It has also strayed from Congress' original intent to spur economic development in rural and depressed areas."

Grassley has pushed for a portion of EB-5 visas to be reserved exclusively for rural projects.But his opponents say such measures could increase what is already a titanic backlog for investors planning to fund urban projects. Most visas have gone to Chinese citizens, who now faceg a five- to seven-year delay.

Fieldstone said the program's backers, primarily the real estate industry, will continue to highlight the need for an increased visa cap. The program now taps out at 10,000 visas per year including the investor, spouse and one child. That means the law accommodates only about a third of the petitioners.

On the other side there is Sen. John Cornyn, R-Texas, who has proposed a light touch, including measures that would help relieve the backlog in China, Fieldstone said.

But until Congress makes a move, it's business as usual on the EB-5 front.

"Nothing has changed," Bettridge said. "Everybody can still file their applications as they have been doing."