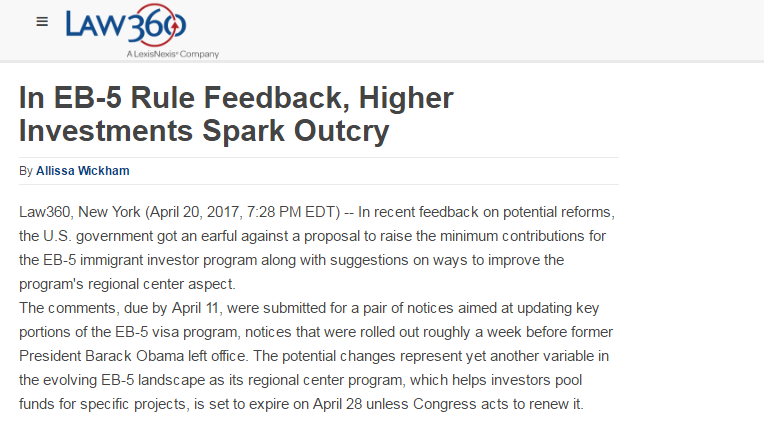 In recent feedback on potential reforms, the U.S. government got an earful against a proposal to raise the minimum contributions for the EB-5 immigrant investor program along with suggestions on ways to improve the program's regional center aspect.

The comments, due by April 11, were submitted for a pair of notices aimed at updating key portions of the EB-5 visa program, notices that were rolled out roughly a week before former President Barack Obama left office. The potential changes represent yet another variable in the evolving EB-5 landscape as its regional center program, which helps investors pool funds for specific projects, is set to expire on April 28 unless Congress acts to renew it.

One notice — a proposed rule that tackles several hot-button EB-5 issues, including raising the investment amounts — received the lion’s share of the feedback with 848 comments. It also attracted pushback from immigration attorneys and regional centers, with some commenters arguing that increasing the minimum investment amount could chill demand for the program.

The EB-5 program provides green cards to foreign residents who invest $1 million or more in a U.S. business and create at least 10 full-time jobs. The investment amount can be reduced to $500,000 for “targeted” rural or high-unemployment areas, as long as the job creation requirement is fulfilled.

However, under the proposed rule, the government would increase the “standard” minimum investment figure from $1 million to $1.8 million, and raise the amount for targeted employment area projects to $1.35 million.

Those areas play a huge part in the EB-5 visa program, as a full 97 percent of EB-5 applications lodged in 2015 involved “investments at the lower investment threshold for projects in TEAs,” according to the government.

But the increase to investment amounts provoked outcry from some attorneys, including Mona Shah of Mona Shah & Associates — a co-founders of the first New York City-based regional centers — who argued that upping the investment amounts to $1.8 million and $1.3 million will “devastate the program.”

In a similar vein, Klasko Immigration Law Partners LLP contended that boosts like those proposed would morph the EB-5 program “from over-subscribed and in high demand, to virtually unutilized, like it was prior to 2008.”

"A sudden increase from $500,00 to $1.3 million, and $1 million to $1.8 million would substantially frustrate the goals of the EB-5 program because there would not be a sufficient number of investors to fund a significant number of projects," Klasko said.

Additionally, the U.S. Department of Homeland Security is proposing to stop letting the states classify “high unemployment areas” and instead have the agency itself decide which locations count as TEAs. The proposed change follows concerns that developers have been gerrymandering TEAs, which were meant to drive investment into economically struggling areas.

That move won praise from The Leadership Conference on Civil and Human Rights, an umbrella organization for civil rights groups that also supported the increases in the investment levels, saying it “strongly” backed the proposal to eliminate states from the TEA classification process.

“This change will ensure both consistency in TEA adjudications and help reduce the amount of gerrymandering of TEAs in the program, hewing closer to congressional intent in creating the program,” the group argued.

Comments were also due April 11 on an advance notice of proposed rulemaking that functioned as a chance for DHS to get feedback on ways to update the regional center program, a major part of the EB-5 program.

While the advance notice on regional centers attracted just 41 comments, some of the feedback was in-depth, including a long critique from the American Immigration Lawyers Association. The group argued that while the “oversight regime” set out in recently suggested EB-5 legislation, including various attestations or disclosures, was a “workable framework,” placing “strict liability upon regional centers for the conduct of third parties” was unreasonable.

The Laborers’ International Union of North America, which said that many of its members have experience working on EB-5-backed construction projects, contended that before approval, regional centers "should be required to vet developers, contractors, and subcontractors" who are involved with a project.

"In too many instances, LIUNA has found that construction contractors or subcontractors that employ laborers who are counting towards an EB-5’s job creation requirements are debarred by state or local governments for serious violations of law but working on EB-5 funded projects," the group said.

The EB-5 regional center program is slated to expire at the end of April, once again stoking uncertainty over whether it will be given a clean authorization, encounter legislative reforms or kick the bucket. It appears that some legislative discussion is still percolating, however. A recent legislative draft sent around by Sens. Chuck Grassley, R-Iowa, and Patrick Leahy, D-Vt., the chair and ranking member of the Senate Judiciary Committee, and provided to Law360 by an representative of Leahy’s office, outlines requirements for fund administration, among other proposals.

Additionally, members of the House and Senate Judiciary Committees — Grassley, Leahy, and Reps. Bob Goodlatte, R-Va., and John Conyers, D-Mich. — still "remain committed" to talks to revamp the investor visa program, according to a statement Wednesday. But whether the reforms to the program really pick up steam this time remains to be seen, as does whether the Trump administration opts to pursue the Obama-era EB-5 regulatory proposals.

If the program does continue, however, regional centers will likely soon be facing more scrutiny. U.S. Citizenship and Immigration Services recently unveiled the start of an EB-5 regional center audit program, which will involve audit teams examining documents and interviewing staffers.