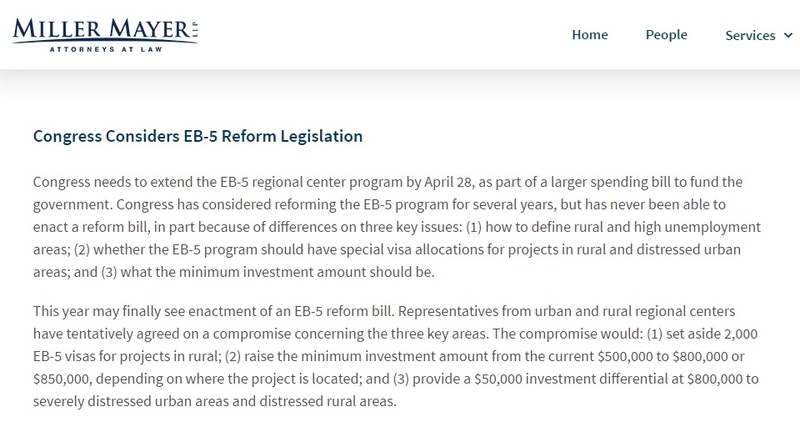 Congress needs to extend the EB-5 regional center program by April 28, as part of a larger spending bill to fund the government. Congress has considered reforming the EB-5 program for several years, but has never been able to enact a reform bill, in part because of differences on three key issues: (1) how to define rural and high unemployment areas; (2) whether the EB-5 program should have special visa allocations for projects in rural and distressed urban areas; and (3) what the minimum investment amount should be.

This year may finally see enactment of an EB-5 reform bill. Representatives from urban and rural regional centers have tentatively agreed on a compromise concerning the three key areas. The compromise would: (1) set aside 2,000 EB-5 visas for projects in rural; (2) raise the minimum investment amount from the current $500,000 to $800,000 or $850,000, depending on where the project is located; and (3) provide a $50,000 investment differential at $800,000 to severely distressed urban areas and distressed rural areas.

All major EB-5 industry representatives have agreed to this tentative compromise. The compromise has the support of key members of the U.S. Senate but also detractors who have long been critical of the EB-5 Program.  Although there is not a lot of time to enact a bill by April 28, we remain hopeful that Congress will not further delay putting integrity measures in place with a 5 year reauthorization of the Program, providing investors and U.S. enterprises with much needed certainty.

In the meantime, discussions continue concerning the larger government spending bill that must pass Congress by April 28. Any EB-5 reforms would be included in that spending bill. Congress hopes to work out a long-term bill that would continue funding beyond September 30, the end of the current federal fiscal year. But Congress has several major issues to resolve, such as whether to include health care reform in that bill and whether to spend billions of dollars to build a wall along the U.S.-Mexico border. It is possible that Congress may pass a short-term extension of a few weeks to give itself more time to hammer out all the details. Stay tuned. A lot could happen in the next week.