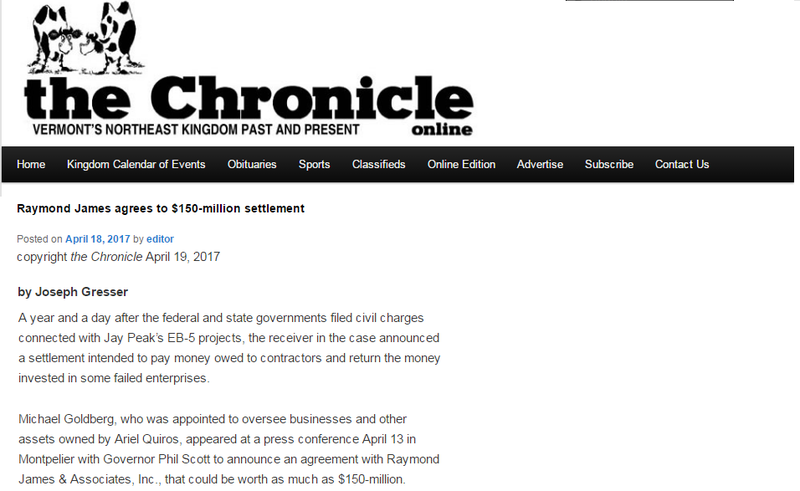 A year and a day after the federal and state governments filed civil charges connected with Jay Peak’s EB-5 projects, the receiver in the case announced a settlement intended to pay money owed to contractors and return the money invested in some failed enterprises.

Michael Goldberg, who was appointed to oversee businesses and other assets owned by Ariel Quiros, appeared at a press conference April 13 in Montpelier with Governor Phil Scott to announce an agreement with Raymond James & Associates, Inc., that could be worth as much as $150-million.

The same day, Raymond James posted the text of the settlement reached with Mr. Goldberg in a filing with the SEC. As a publically traded company, the financial services firm is required to disclose events, such as legal settlements, that may affect its business prospects.

Although it agreed to pay, Raymond James did not admit any wrongdoing.

According to the settlement documents, the company and the receiver have been discussing a settlement since last summer. Last June the Vermont branch of Raymond James reached a $5.95-million settlement with the state. That money will be subtracted from the $150-million the national firm is to pay out.

In a telephone interview Tuesday, Mr. Goldberg said he is pleased with the settlement, but said it had taken a lot of hard work to come to terms.