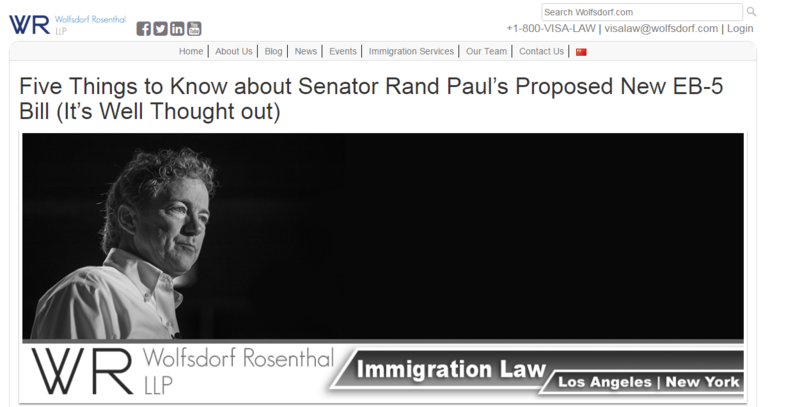 On March 27, 2017, Senator Rand Paul (R-KY) introduced a well-thought out new EB-5 bill in the U.S. Senate, S.727 –  called the “Invest in Our Communities Act”. The bill seeks to increase the worldwide level of employment-based immigrants to the U.S. and to reauthorize the EB-5 Regional Center Program.  The EB-5 bill has been referred to the U.S. Senate Committee on the Judiciary and is one of many pieces of legislation on EB-5 being considered. Senator Rand Paul gets it. This bill will not only reform the program but invigorate it by providing a well-thought out long term solution. With 42,647 I-526 petitions filed since Fiscal Year 2014 and pending, over $21billion has been invested in the U.S. economy creating hundreds of thousands of jobs and allowing hundreds of projects to move forward.(The 3,955 petitions that have been denied or withdrawn have been deducted).

Senator Paul has got it right. This bill fixes the program but doesn’t throw the baby out with the bath water.

Because Rand Paul is a powerful senator, hopefully this proposal will be taken seriously, as it offers the best solution to the problem of the visa backlog for Chinese EB-5 investors.  However, it is presently not likely to be the main EB-5 reform bill; that will likely come from Senator Grassley (R-IA), with Senators Cornyn (R-TX) and Schumer (D-NY) as supporters.  Congress appears to want to reform the EB-5 Program prior to expanding its use, so once those other difficult issues are resolved (minimum investment amount, TEA reforms), there may more EB-5 visas in the future.

Here are 5 things to know about the new proposed EB-5 bill.

This is a solid bill and is exactly what we need to reform and revitalize the EB-5 Program Visa.  We are hopeful that a consensus on these issues can be reached by U.S. Congress and EB-5 stakeholders to continue this job creation program’s positive effects on the U.S. economy.   We also hope that the Trump Administration with its knowledge in this arena will endorse and support this bill.