People in the News—March 30, 2017—Greenberg Traurig 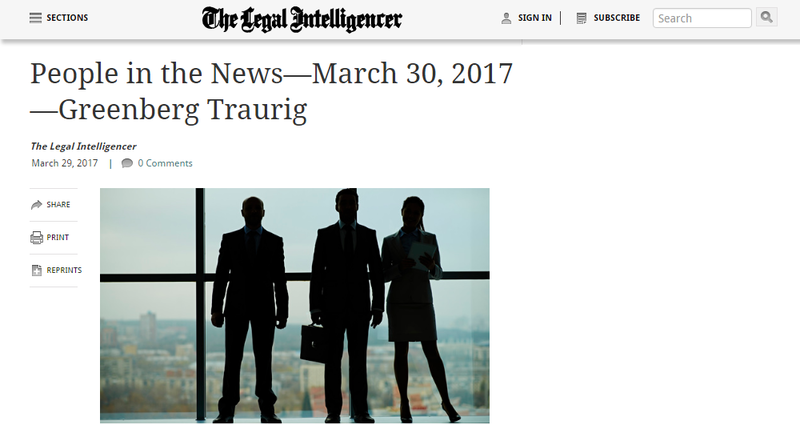 Additionally, she works with developers across a variety of industries seeking ­capital for new projects that qualify for EB-5 investments.

She counsels clients on raising EB-5 funds for real estate developments, hotels and assisted living facilities, among many others.

Gina Rubel, CEO of Furia Rubel Communications Inc., was appointed to serve on the board of directors of Women Owned Law, an organization devoted ­exclusively to women legal entrepreneurs.

Rubel is a founding member of the association, which was formally launched in February 2017 at its board meeting and founders' dinner in Philadelphia.

She also serves in an advisory capacity on the communications committee.

She is a graduate of Drexel University and Widener University School of Law.
Additions

He focuses his practice on defending railroads in personal injury and wrongful death/survival actions filed in Pennsylvania and New Jersey state and federal courts.

Hunter is a 2001 graduate from Villanova University School of Law and obtained his bachelor's degree from Northern Arizona University.

Women and minority groups are making small gains nationally in U.S. law firms, but according to the American Bar Association's 2016 National Lawyer Population Survey, the law field is one of the least racially diverse professions.

In an effort to lead the push for equality in the law profession on a local level, Archer announced that the firm will continue the DiscoverLaw.org Student Ambassador Program partnership with the Esperanza Academy Charter School and the Law School Admission Council for the remaining 2017 school year.

The goal of this extracurricular program is to encourage racially and ethnically diverse high school students to discover career opportunities in law, and to provide these students with resources to help them along this path.

The Legal and Pennsylvania Law Weekly are looking for verdicts and settlements to report.