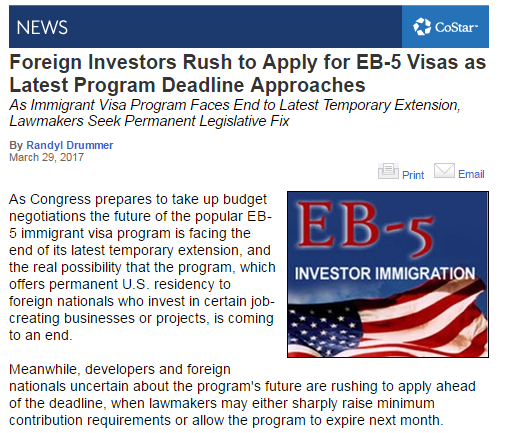 As Congress prepares to take up budget negotiations the future of the popular EB-5 immigrant visa program is facing the end of its latest temporary extension, and the real possibility that the program, which offers permanent U.S. residency to foreign nationals who invest in certain job-creating businesses or projects, is coming to an end.

Meanwhile, developers and foreign nationals uncertain about the program's future are rushing to apply ahead of the deadline, when lawmakers may either sharply raise minimum contribution requirements or allow the program to expire next month.

Sen. Rand Paul, R-KY, a longtime advocate for the EB-5 program on Monday introduced a bill to "increase the worldwide level of employment-based immigrants and to reauthorize the EB-5 regional center program" in advance of its scheduled expiration on April 28. Paul's proposed legislation in the Senate, S.727, was referred to the Senate Judiciary Committee for consideration but has not been assigned a hearing date as of late Wednesday.

Multifamily housing industry veteran Thomas T. Demery, who has consulted in securing EB-5 funding for projects and regional centers in Florida, Washington, D.C. and Kentucky, has seen an uptick in the number of Chinese investors filing applications in advance of the April 28 deadline.

"There's a push by some very large real estate projects to get as many applications in as possible under the current rules, because no one knows what the new rules will look like," Demery, president with Washington, D.C..-based Capital Solutions, Inc., tells CoStar.

In addition, Demery said, among Chinese investors, there are concerns regarding currency controls and the state of the Chinese economy, not to mention the current sensitive state of relations between the U.S. and China, both of which are motivating those Chinese investors with means to file for the program, creating a surge in applications.

Earlier this month, the House Judiciary Committee held a public hearing on a proposed rule change by the Department of Homeland Security that would more than double the minimum required EB-5 investment amounts, from the current $500,000 if located in a Targeted Employment Area (TEA) of high unemployment, to $1.35 million, and from $1 million to $1.8 million for projects located outside a TEA.

House and Senate leaders, including Senators Patrick Leahy and Judiciary Committee Chairman Chuck Grassley, who both were early champions of the program, both called for a major overhaul during the March 8 hearing. Rep. Jim Sensenbrenner, R-WI, chairman of the Subcommittee on Immigration and Border Security, declared at the hearing that "the days of last-minute extensions in continuing resolutions are over."

"Let me repeat that, no more extensions in CR's," Sensenbrenner said. "It's time for all parties to come together to the table so the Congress can do the often dirty job of legislating."

After noting reports of the program's "rampant waste, fraud and abuse," the most compelling recommendation of an interagency working group's analysis of EB-5 "was to sunset the regional center model due to crippling fraud and national security vulnerabilities," Grassley said.

However, the program also had plenty of supporters at the hearing, including Rep. Zoe Lofgren (D-CA), who conceded the need for modernization and reform but also added that "the benefits of this program are on display in the Bay Area, where I'm from."

"The program has funded a new hotel in the revitalizing San Jose airport corridor in the [District] I represent, as well as development in revitalizing Treasure Island," Lofgren said. "According to investors, these projects would not have happened without EB-5 financing."

While Demery said he favors permanently authorizing reform legislation that would prevent "gerrymandering" of project boundaries for inclusion in TEAs, as well as curb fraud and other abuses, he cautioned that going too far in restricting where the program can be applied would do no good.

"Limiting EB-5 to a few Census tracts isn't going to benefit the program, create jobs or revitalize neighborhoods," he said. Demery also agrees with Sensenbrenner's call to stop kicking the legislative can down the road.

"As Congress again takes up the issue, I'm hoping the discussion focuses on permanent legislation or a long-term extension so we don't get dragged through the keyhole every six months," Demery said. "That will bring some stability and predictability to the market to the program and marketplace."